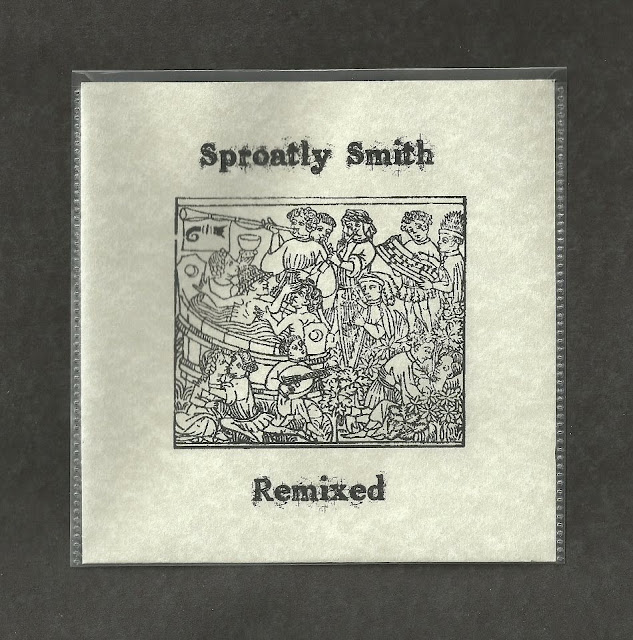 While the idea of remixing a folk album might seem a little bewildering to some (those looking for Timo Maas doof should direct their enquiries elsewhere), there's no doubting the fact that the albums of the Sproatly Smith collective have the requisite depth for a remixer to get their teeth into.
Revisiting material mostly from the last Sproatly full length "Times Is 'N' Times Was" (reviewed here), and "The Minstrel's Grave" (reviewed here), "Remixed" further blurs the boundaries between folk, psychedelia and vaguely hauntological electronica, and is a logical extension of Mr Smith and company's own explorative nature by a sympathetic bunch of like-minded musical explorers (James McKeown, Sedayne and the Hare & The Moon being particular favorites of mine who all excel here).
So while the Sproatly's natural Albion instincts are present in full splendour, they're cast through a filter of often quite extreme psychedelia that suggests that Sgt Howie might have had a much better time in the lead up of the Wicker Man if he'd dropped some acid and disappeared around the corner with the landlord's daughter, instead of being a pompous twat.
The range is impressive too, with Active Listener friends the brothers Peters each taking on "O Death" with staggeringly different results - the Melmoth the Wanderer mix beginning like a lysergic George Martin production before being hjiacked by some ghostly David Gilmouresque slide guitar, while the Nightbirds mix travels from spooky unadorned vocals to vaguely clubby beats in it's six and a half minutes.
This range is typical of what's on offer here, but these seemingly disparate strands make a strangely cohesive whole, tied together by ghostly unadorned vocals, bursts of radio static, washes of psychedelia and Mr Smith and company's shared vision of an Albion dreamland.
Recommended, and get the originals too (from the Sproatly Smith bandcamp page, Folk Police Recordings and Reverb Worship.)

Available digitally below, or on CD from Reverb Worship.