Hidden Masters "Of This & Other Worlds" Review 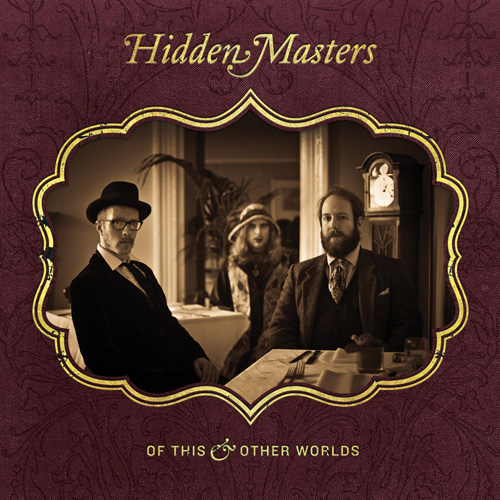 Glasgow three-piece Hidden Masters first announced their presence in 2010 with the 7" release of "Nobody Knows That We're Here / Grey Walls Grey" and it was immediately apparent that this lot were contenders.
From these strong beginnings. they've taken their time, carefully crafting their debut full length, and it shows.
Now signed to Metal Blade / Rise Above who are obviously diversifying their catalogue (welcomely so if they can keep snaffling stuff of this pedigree), "Of This & Other Worlds" fulfills all the promise of that early single, and then some.
Diverse doesn't even begin to describe the sounds these three conjure and master effortlessly.
Opener "She Broke The Clock of the Long Now" only needs four and a half minutes to wind it's way from heavy prog-rock riffery to agit-psych pop to a massive three piece harmony section that out-Corals anything the Coral have done for ages (and you're reading the opinions of a pretty massive Skelly fan here).
There's also hints of everything from lush barbershop harmonies to evil, trill-laden Sabbath riffs, with pretty much everything you could imagine falling inbetween being integrated in a seamless fashion. Short attention spans have never sounded so good.
Diversity and adventurousness aside though, it's the carefully crafted songs that are the true success story here - varied and complex enough to never feel overdressed in their often resplendent finery, but full of memorable hooks that could be stripped down to the most basic arrangements and still retain their ability to connect with the listener.
Masters? Without a doubt. Hidden? Not for much longer if there's any justice in the world.