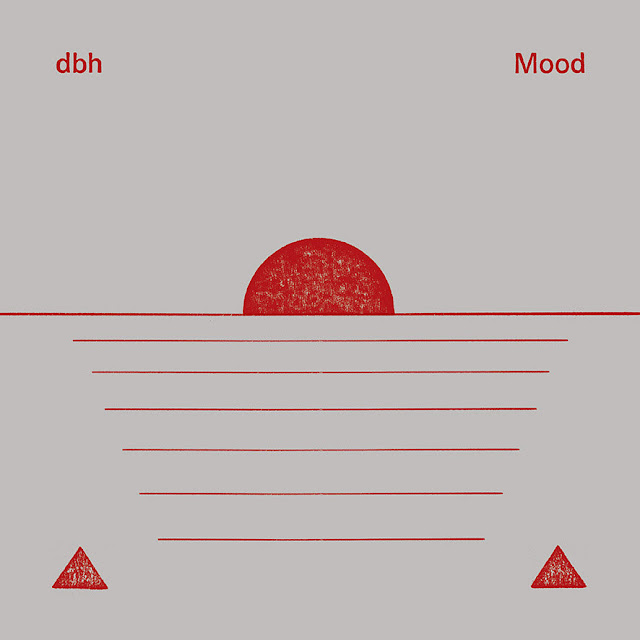 Its always nice to mooch around the internet and find yourself signposted to a great new find. Such is the situation that arose when six-string explorer, Nick Jonah Davis tipped his FB friends off about this new release. "Mood" by dbh is the first physical issue on Manchester indie label, Thread Recordings and the second release by the artist known as dbh. You will be pleased to hear that it's a cracker.

"Mood" may give some of the game away with it's informative title but there is much that lurks beneath the many changing moods on display in this collection of 11 tracks recorded by guitarist/ multi-instrumentalist from Manchester in England, Dan Bridgwood-Hill. What unites them is the mastery displayed of the wordless narrative (it's entirely instrumental) and perceptive use of musical contrasts. "Mood" absorbs UK folk, American 'field recordings' and ambient/drone sound scapes to deliver a tapestry of sonic delights that is very much the domain of its author and executor.

Opening with a left-right combination of eerie synth soundscape "Kard Loop" and serpentine guitar exploration "Shed Light", (the latter with its outro managing to be reminiscent of both 'Hallway of Mirrors" by Alexander Turnquist and bizarrely "Blue Jay Way" by 'you-know who you'), the initial exchanges of 'Mood' lead you down a pathway of shady glades, half-seen vistas and misty hollows.

And then - sunlight! "New Anthem" is one of those beautiful sun-dappled acoustic guitar turns that always has you checking to see whether there are any birds at the bottom of the garden and has you wishing you lived in a cottage on the North Yorkshire Moors rather than suburban London. Deftly executed, like pretty much everything on this outing, its a real heart-warmer. "Untangle the Jig" follows bringing evening in its wake with its lovely revolving guitar motif and 'Take 5' brushed drums. It gives the listener the opportunity to get some of that great dbh guitar playing - intuitive and conversational; the many refrains and motifs presenting the listener with an engaging wordless dialogue before vamping out under a pink moon (and a metronome). Absolutely bang on.

'Blues for the Read Sun' is Ry Cooder duking it out with William Basinski as delta swamp riffs are enveloped in decaying layers of fidelity in a striking fashion. Without the sonic treatment it could be 'Paris, Texas' ; with it you have a menacing, distorted bayou of sound that fades into the impenetrable distance. I believe it's dedicated to the memory of genius Pentangle guitarist John Renbourn (RIP).

Side 2 (track 6 digi-fans) brings us up for air with the lovely 'Defy/Win' which manages to stride both sides of the Atlantic, invoking as it does both sweeping American plains and quiet English backroads. Its sweet guitar picking and tasteful harmonium accompaniment breezing along, charming the listener with its playfulness. "Bog Dance" follows and is another lovely 'porch moment' expertly delivered on unaccompanied guitar with the occasional twang for good measure - a close as dbh gets to delivering a hoe-down. Though I suspect dbh may frown at me for saying so.

"Low C" is my personal highlight on the record with its endlessly tumbling guitar notes pealing downwards, saved from certain doom by a blanket of beautiful pedal steel and a feather bed of understated drumming. The way the song with its drowsy atmosphere and closing flutters of distortion and decay segues into the brief and genuinely surprising piano splashes of 'Think' reminds this reviewer nothing less than the cine-music of Barry Adamson's ground breaking 'Moss Side Story' (consider this praise indeed) another son of Manchester. That good.

"New Angles" mines the kosmiche/hauntology seam to perfection with its gently perambulating melody tracking an elliptical orbit around a sympathetic drum pattern whilst violins hover beneath clouds of harmonium ( I believe). Not a million miles away from the kind of organic and progressive dreamscapes purveyed by the Boards of Canada ; or even the more reflective moods of the Brian Jonestown Massacre come to think of it. Very nice indeed.

Matters are brought to a close by the gently swaying "Revelation Drift"; which may feature banjo, definitely features electric guitar and tape hiss, and undulates indolently on a sparkly sea for its four minute stay. A compelling sound picture. In fact, I half expected a seagull to appear at my window to offer its help in completing this review for you all.

So there we have it - an excellent sophomore effort. On a new label that has set the bar high for itself. Set your watch and remember the day you heard it first. dbh is looming on the horizon. Catch the mood.

Available on limited vinyl (250) and unlimited digital through Thread Recording via bandcamp and select stockists.