Vic Mars - The Land & The Garden 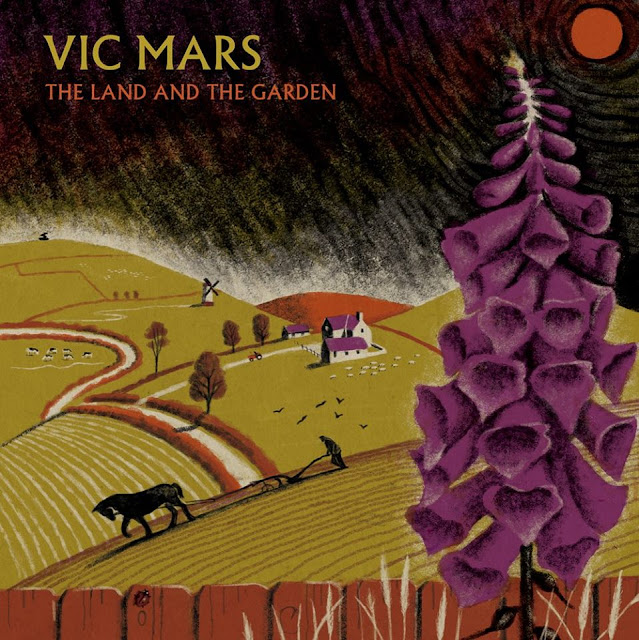 Hold the front page! We have the latest of late entries for the coveted record of the year in 2015. Read on dear listener, read on…

Clay Pipe Music is a micro-label run by the outrageously talented illustrator, Frances Castle from her base somewhere in East London. She is incredibly discerning in her choice of artist to champion and is willing to match their artistic endeavours with her own, creating the most sublimely beautiful packaging for their art to be received by the wider world. Therefore, to be on Clay Pipe means you are special (for instance Plinth, Jon Brooks and Sharron Krauss all undoubtedly fall into that category) and so I was understandably stoked to receive a copy of this to review.

So to the record in question. Vic Mars has previously been responsible for composing some fine hauntological/electronica pieces of work, all analog synths and flashbacks to schools programmes of the 70’s and 80’s. Much of it is great and you should check out his bandcamp page for evidence of my truthsay.

However, “The Land and the Garden” is an altogether different beast. This is hugely ambitious and beautifully realised, neo-classical electronic/organic chamber music with mellotron (and associated ‘natural’ tape hiss) at the centre of much of the action going on. This is the sound of memory – a psycho-geographical survey of his British homeland largely dreamt up when Vic was way out east in Japan. Part real, part myth, part imagined and refracted back through the looking glass of time. This is no derivative, niche hauntology offering.

The record (it's out on vinyl) is a complex concept piece that operates on several levels, to create a mood of yearning and barely hidden nostalgia for an England that may in truth never have existed. It’s a collection of sonic essays that drink from a hugely diverse number of rich musical fountains such as early 20th Century UK classical composers like Vaughan Williams or Benjamin Britten - the spectre of ‘The Lark Ascending’ is never too far away from my thoughts when listening to this record, or the earlier ground-breaking work of Dvorak and Mahler. There are also references to the post-war optimism that filtered its way into the documentary soundtracks of the 1950’s and 1960’s; and even 70’s BBC TV kids favourites Fingerbobs and Bagpuss. The other influence would appear to be Brian Eno and his run of plainitive piano/keyboard led ambient records from the late 1970’s as often delicate and contemplative piano figures drive much of what is contained in these grooves. As a series of musical reference points this is the equivalent of a ‘Royal Flush’ to my ears and the alchemy exercised by Vic Mars in synthesising this into a coherent whole is impressive. It’s a delicious melange of styles that intoxicates the listener and evokes strong non-specific memories of time and place. Its gentle but never soporific; sentimental but never maudlin. It's a beaut.

Vic Mars invites you to come along with him on a journey across the ‘lost’ countryside and coast of Britain in all its colour and grandeur; its agriculture and beauty. Picking out highlights from the 14 wonderful vignettes within is a fairly pointless task - it most definitely should be heard in its totality but since you asked, “Villages, hamlets and fetes” with its lovely circular mellotron motif with ‘oboe’ counterpoint and major chord changes is a particular joy. You can almost smell the country air oozing from the speakers. “Butterflies, bees and other insects” is a distant relative of Belbury Poly’s “Geography of Peace” with its flutes and acoustic guitar strumming leading us out across the countryside, past the old church and into the mind meadow. Lovely.

The mournful, closing “Bracken and grassland” with its dreamlike piano figure and sympathetic (synthetic?) vibraphone and oboe accompaniment is exquisite. As it subsides into silence we look up to see that the blackbirds have gone off to roost, the tractor is back in the shed and the sun has disappeared behind the distant, rolling hills.

“The Land and the Garden” is a wonderful achievement - a beam of sunlight through a broken cloud mass, a field of reeds swaying gently in a meadow lea, an acknowledgement that life may be slightly absurd but it is ultimately a pursuit that can still beguile and hold many treasures. Vic Mars is in a beautiful place out in the country. Share in his wonder.

As with all Clay Pipe releases it is strictly limited to 300 numbered copies so the advice is to not hang about. Available from the Clay Pipe website or sympathetic stockists.