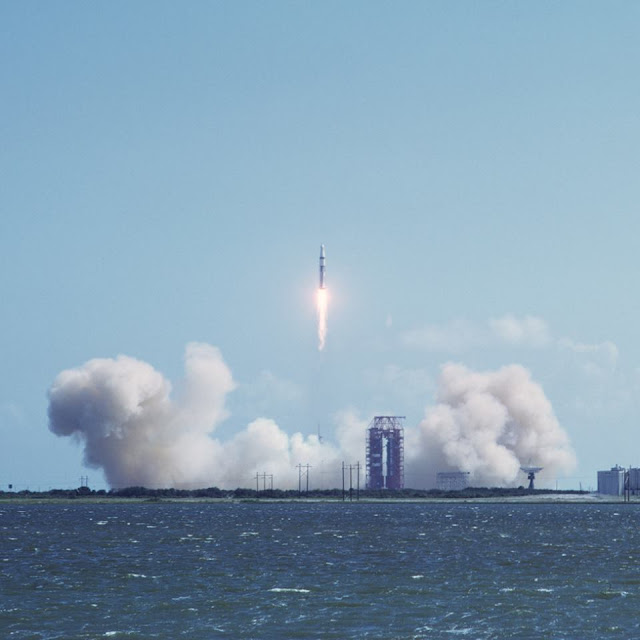 Using infinite space and the loneliness of the vacuum as an extended metaphor for the human condition is a familiar concept, but rarely has its depths been plumbed so thoroughly as they have been by Bristol based singer/guitarist James McKeown (of Hi-Fiction Science and excellent solo work), recording this time under the name The Dead Astronaut. His self-titled debut as such is a concept record, but one that balances narrative with tone and allows for elasticity in the record without breaking from the idea. As is probably obvious from the cover art, McKeown is after the dramatic big picture - but, to his credit, every song remains grounded in human experience over contextual drama.

Using voice samplings can be difficult, but opening track “North Star Loop” sets the tone fairly well with, from what I can gather, an exchange between HQ and an astronaut pre-flight, using odd phrases like "pre sleep" and “post sleep” without being heavy handed or overly obtuse. Accompanying music is a dramatic build that feels cinematically bleak - a fitting introduction to the album and follow up “Concrete Town,” which hits all the right notes of lush acoustic rock.

McKeown’s songwriting is natural, and, as far as the quality of his arrangement, he’s offered a consistent but experimental set here, never really sticking with every piece of a formula as he propels forward through space. “Ricochet,” for example, as McKeown laments the (really only decades) old astronaut’s dilemma of separation, utilizes drum samples, live drums, strings, and acoustic guitar, and makes fine use of a wah-wah pedal. Besides, we get these very ambiguous lines that are somehow mesmerizing too (sorry for any mis-typing or -representation): “There’s a hole in my hope that I hoped you could fill/Now there’s a hole in your head that means that you never will…” and “We stare at our tiny screens, at the old photographs.”

The eponymous track provides the most interesting use – at least to this listener – of the motif, drawing a search and rescue mission as a metaphor for social place and meaning. And McKeown pulls it all off well, in a well-arranged, mellow near sing-along in the style of the best folk-rock ballads.

To McKeown’s credit, “The Dead Astronaut” feels immediate, as though each song, though likely meticulously arranged and produced, was recorded in a sitting. For those of us who associate space exploration with long jams and weird synths, glazed-over riffs, “The Dead Astronaut” turns purposefully to a more intimate and personal experience – with the exception of “Skyboat Reprise,” which is all those things – and prefers the resonating acoustic guitar chords to delay-laden jammers.

Vinyl and digital both available here: