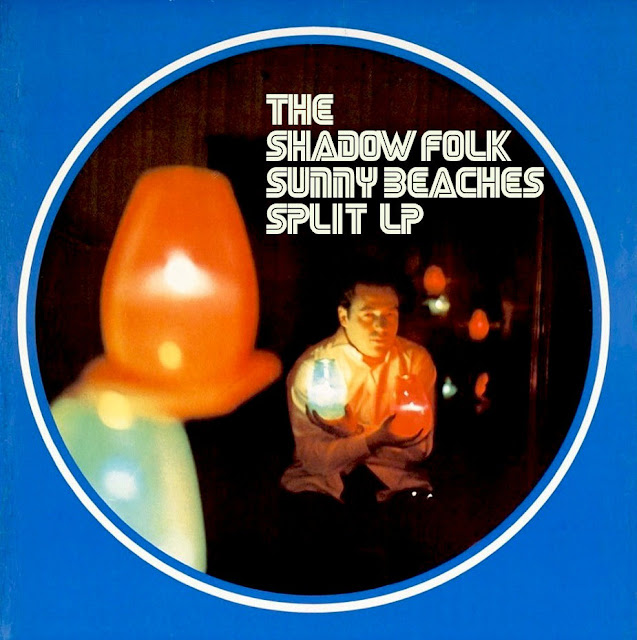 This new Shadow Folk / Sunny Beaches Split LP is an album that takes you on a journey from the 60s to the 90s.

It’s great to hear a new band that brings back the 60s-70s era vibe. Shadow Folk, hailing from Halifax, Nova Scotia, completely surround themselves in this for their half of this new split. It’s hard to hit that “sound” from the 60s-70s. The feeling of our time just isn’t on par with what was happening fifty years ago. But sometimes something special happens, and that vibe can still be tapped into. It's happened here, enveloping the band and flowing into every song. Influences from David Bowie to The Pink Floyd can be heard during thir half, and while they're clearly trying to capture a certain sound, The Shadow Folk have made it their own.

Also hailing from Halifax, Nova Scotia, Sunny Beaches is a 4 piece band led by Keith Doiron. They take over on the second half of this split LP. Their side gets a bit grungy. The soft vocals are traded in for heavy distorted ones. The bass gets more punchy and distorted, while the rhythm guitar stays about the same, showing that that sound shines in any era of music. It’s like we jumped straight from the 60s to the 90s, invoking the grunge and indie rock sound of that era, mixing them together to create a sound of their own. Even the guitar solos ring of the 90s. It’s like Cake had a baby with Alice in Chains and they named it Sunny Beaches. Then, sometimes, Beaches’ friend Syd Barrett comes over and picks up a guitar, with a unique sound coming from this creation.

Overall, Shadow Folk/Sunny Beaches Split LP is a great album, showing that two bands with quite different sounds can get together and create something special, if they share a vibe and a mindset.