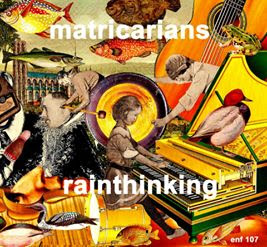 Following on from last week's release of the new Kitchen Cynics album "Common Blue" comes its sister album, "Rainthinking" by Alan Davidson's group project Matricarians. They're a slightly more experimental outfit than the Kitchen Cynics, but all of Davidson's hallmarks are very much in evidence.

We're very proud to be able to release these two albums on the Active Listener Records imprint, and recommend them both to any forward thinking fans of psychedelia, folk, and experimental music.