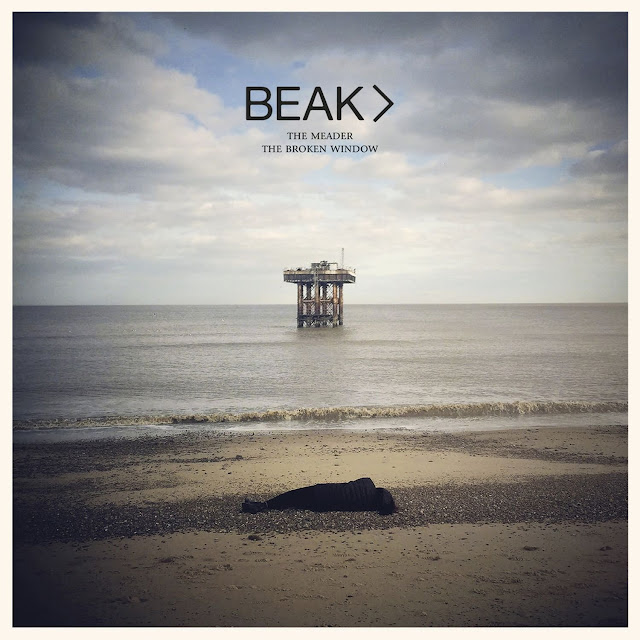 For those who haven't been paying attention, BEAK> is Geoff Barrow from Portishead's Krautrock three-piece. And so are <KAEB, although the material on side two here, credited to <KAEB is a little different to BEAK>'s normal fare.

From the very first beat of "The Meader" things are more expansive, and yet essential BEAK> elements remain as the groove gets funky, the vocals more melodic, but the frequency-stripped production and Krautrock vibe is still intact. "The Meader" pushes straight ahead, albeit with a swagger. The minimal guitar work adds a rhythmic loop that locks in with the drums and signifies a new confidence in what BEAK> can accomplish within the construct of their signature sound. "The Broken Window" starts off as if it is something from Barrows' soundtrack work of late and then drops out to reveal a simple bass melody that sounds like it comes straight from a post-punk b-side circa 1982. We're talking a groove that would be played on repeat as you stared at the posters on your wall and wished you could be cool. The bass line transitions into a full groove and the synth melody creeps in with a steady focus that leads the song into bliss, a bliss that unfortunately ends too soon as this one could have filled up an album side on its own.

Flip the record and things change. "When We Fall" is a psych-folk tune with pitch-bent guitar and synth that is guided by dual vocals. It's a pleasant tune that makes it exciting to see what else may come to fruition under the <KAEB moniker.  The EP ends with a dark strange one, "There's No One", which comes across as if it was sampled from Portishead's second album - not unusual considering Barrows' association with both bands. Jonwayne features as a guest rapper/spoken word beat poet with the song growing into the sort of avant-weird that Can would drop into their albums.

It's a fitting end to an EP that fits neatly into, and expands upon the aural world which BEAK> has created over their past few releases.

Vinyl available here, with digital available through this streaming link: