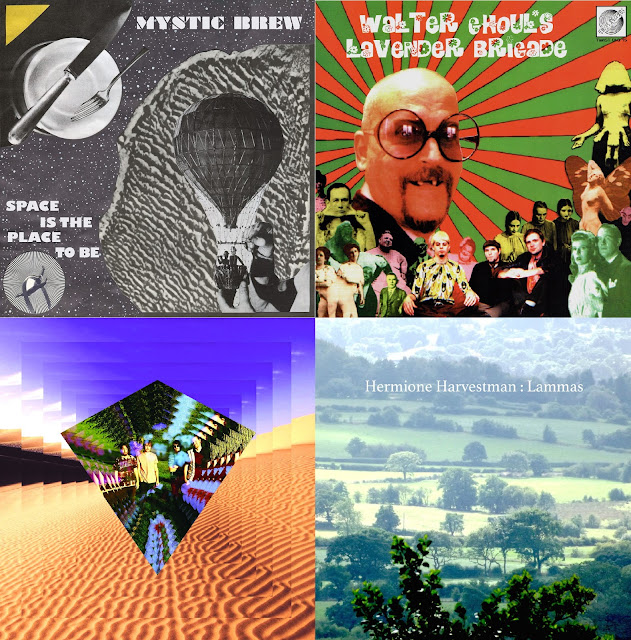 Mystic Brew - Space is the Place to Be

While many psychedelic artists bristle at the idea that they're part of a revival, Russian band Mystic Brew proudly apply the 'sixties revival' tag to all of their Bandcamp releases. The most recent of these, "Space is the Place to Be", is exactly the sort of influence-on-sleeve homage that we love so much here at Active Listener Towers. There's a well observed, affectionate Doors tribute in "World Won’t be the Same", but the band are at their best when they rely less on their influences and pursue their own muse. The title track demonstrates this best, all vintage garage vibes, Manzarekian keys (again) and explorative guitar jams straining at the leash.

Available as a free download here (as are some of their earlier releases):

While we're in tribute / homage territory let's check out Walter Ghoul's Lavender Brigade. Originally released in 1999, this excellent effort from Damien Youth and the less prolific, but equally fab Zane Armstrong has recently found its way onto Bandcamp as a free download. It’s an unabashed love letter to UK sixties psych-pop, essentially borrowing the Dukes of Stratosphear's bag of neo-psychedelic tricks, and ramping up the lysergic fairground elements. It's a colourful wonderland which suggests Syd Barrett has been enlisted in Sgt. Pepper's Lonely Hearts Club Band, bringing a top tier selection of tunes along for the ride.

The original twelve track album can be had on a name your own price / free basis through the streaming link below, while those who want to dig deeper can buy a complete 26 track collection of the Brigade from Damien Youth's Bandcamp page.

Halifax, Nova Scotia seems to be one of the planet's psychedelic hotspots for the time being. And thanks to the wonders of the interweb we get to hear the filtered through effects of whatever it is that's in the water there. Justin McGrath obviously drinks a lot of that water. We've covered his band Shadow Folk numerous times within these pages, and here he is aboard another equally psychedelic, and potentially even more splendid flagship, the Age. Title track "Trafalgar" is a hazy mirage of a song, with gently undulating harmony vocals, and layers of dreamy backwards guitars. Lovely. But don't relax too much because "Innocent Man" is a much more raucous affair, sounding like a vintage rehearsal recording from some previously unknown Lennon / Kinks collaboration.

Download the EP through the streaming link below, and have a dig around the rest of their Bandcamp page for more free downloads.

We've talked about hermetic rambler Hermione Harvestman before, and I’m sure we'll continue to do so while her archival Bandcamp page is excavating naturalistic yet unearthly gems like this. For those unfamiliar, Hermione Harvestman was a church organist who composed spectacular solo electronic pieces in her spare time, amassing an impressive catalogue of Radiophonic kosmische gems, which have only begun to find their way into the world since her death in 2012.

"Lammas" is the latest of these, a single, lengthy meditation upon the festival, filtered through the usual gorgeous vintage synth tones, which conjure images of ley lines and stone circles. Harvestman's unhurried, understated approach is unmatched in my opinion, and this is as good a place as any to fall under her spell. Lovers of vintage kosmische sounds will absolutely adore this.