The Green Pajamas - Death by Misadventure 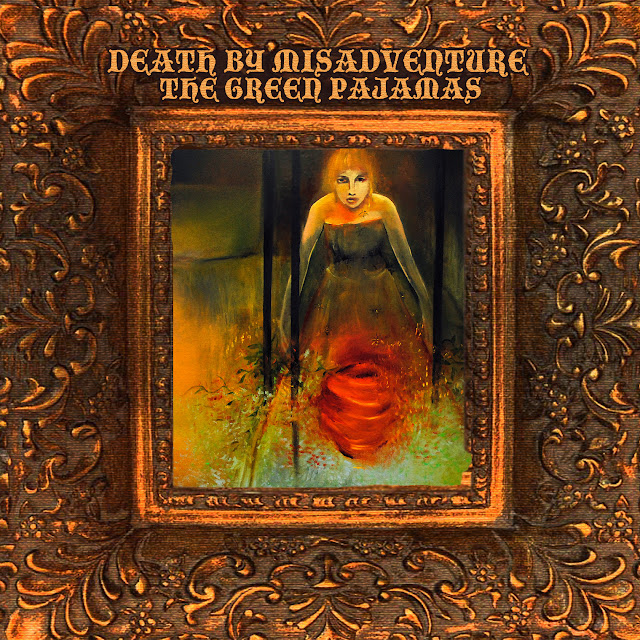 I've reposted this from it's original 2012 CD review and release, as Sugarbush Records have just released a very limited run (250 copies only) on green vinyl - get in here before it's sold out.

It's doubtful whether there are any other acts out there who have amassed as impressive a body of work, while reaching so few as Seattle's long running Green Pajamas.

One of my intentions when setting up the Active Listener  was to share music that I felt hadn't received the exposure it was due, and the Green Pajamas were one of the very first bands I had on my agenda. And this seems to be a common theme - you've either never heard of the Green Pajamas or you're an obsessive, devotional fan. They seem to be the type of band that brooks no middle ground.
"Death By Misadventure" is their thirtieth release, and predictably it's a marvel. It's taken me a little longer than normal to put together this review, as the Green Pajama's albums take a little time to digest properly. They have an initial appeal that is so immediate that you feel like you know the album almost straight away, but further plays reveal deeper levels and other hooks previously unsuspected, meaning their albums go from good to great with a little familiarity.

Following on from the country rock detour of their "Green Pajama Country" album, this finds them heading back to more familiar territory, with a few nice surprises along the way.

The first half of the album is a concept song-cycle called "The Fall of the Queen Bee" - which ostensibly may sound like a fairly boffiny concept headed for failure and even tedium. Once run through the Green Pajama filter though even the most unlikely subjects act as a springboard for the quality songcraft of Jeff and Eric. From the McCartneyesque power ballad "Ring around the Sun" to the exotic gypsy waltz of "The Queen's Last Tango" this is fine stuff, and in the tradition of all the best concept albums, is best enjoyed without trying to follow the somewhat dubious storyline.

The second half, "Cruel Dreams, Cruel Things" is made up of unconnected songs that find the Pajamas continuing to do what they do best, namely tuneful acid-pop laced with inspired guitar work, harpsichords, a playful sense of English whimsy not heard since the late sixties, and naturally, choruses that sound like they've been plucked from some great undiscovered songbook in the sky.

Business as usual then for the Pajamas, and probably about time you discovered them for yourself, hmmm? There's no need to be embarrassed, it's never too late.