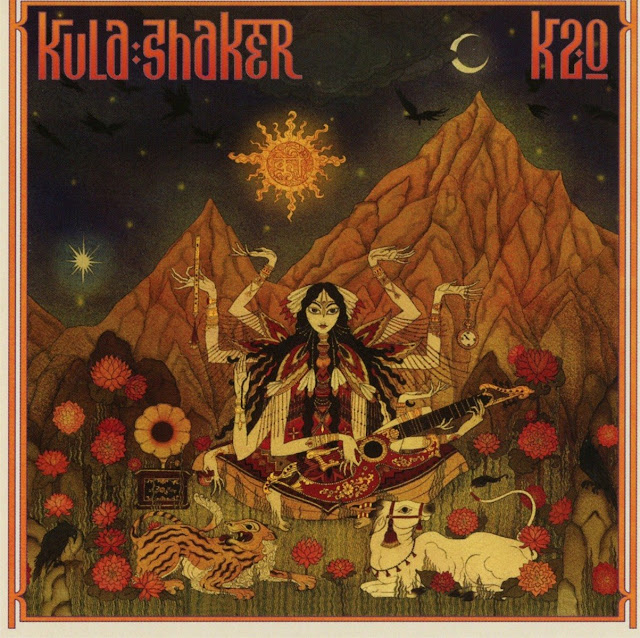 This year marks the 20th anniversary of Kula Shaker’s debut record "K" (and the 21st anniversary of the band’s formation), so it is only fitting that a new album has been released at this juncture, as well as after their second prolonged hiatus this century (the first from 2000-2005, the last from 2010-2015). I can’t lie when stating that I had no idea what to expect from the new album "K2.0"; I tend to try and manage expectations when a favorite artist releases anything new, let alone when reforming for a second time. Within the first 25 seconds with the sounds of the Indian instrumentation fading in, "K2.0" delivers exactly what you would want from the band. Whereas 2006’s "Strangefolk" found them trying to re-establish an identity following an extended hiatus (albeit with a few missteps), and 2010’s "Pilgrim’s Progress" was a welcome, understated departure into folkier sounds (and in reality, the perfect, logical pre-cursor to "K2.0"), here Kula Shaker sounds almost reborn, yet older and wiser.

Album opener and lead single “Infinite Sun” has been stuck in my head firmly for the last three days (“Everything she touches changes…”) and could easily fit in on either of their massive nineties LPs, complete with sitar solo and chanted vocals. From what I understand, that assessment is not far off, as Crispian Mills stated in a recent interview that it’s a song they’ve had for a while, but had yet to record. Solid stuff to kick things off and setup what is to come. From there, “Holy Flame” introduces an acoustic vibe, before a ripping chorus takes over. “Let Love B (With U)” is a song the Doors never wrote, with all the bounce and organs you would expect. “Here Comes My Demons” is about as prog rock as Kula Shaker can probably get, with three pretty distinct sections over a sprawling six-plus minute song.

I swear “Oh Mary” starts out with a sample of Paul McCartney talking (from "Magical Mystery Tour"?), and as I sit there pondering that, I miss out on a very Beatle-esque song, a simple and warm rocker. “High Noon” evokes scenes from a western, and could very well have been on "Pilgrim’s Progress". “Hari Bol” continues the Kula Shaker tradition of Hindi religious chants on their records, this one a meditative number that one only wishes lasted a few more minutes. The LP wraps up with what should be considered the highlight of the LP (and perhaps even in the latter portion of their catalog) in “Mountain Lifter”. The song climbs as it progress, with a fiery guitar solo and organ which crescendos (with some restraint) to the conclusion of the album.

And I would be remiss if I didn’t mention the art, which is not only one of the more beautiful and striking covers you will see, but also fits nicely as a companion piece to "K". And just like that, everything comes full circle. It’s not as grandiose as 1999’s "Peasants, Pigs and Astronauts", and is obviously not full of the youth and energy of "K", but that’s already been done; this is Kula Shaker’s next chapter, and thus far, it’s a good read.