Doug Tuttle - It Calls On Me 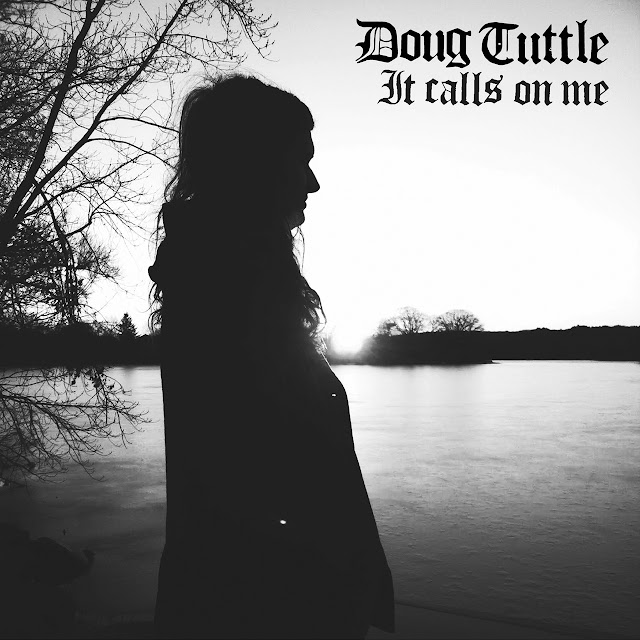 Ah the dawning of a new year brings a new offering from Doug Tuttle, co-founder of the late lamented Mmoss and now emerging solo artist in his own right. Following his excellent self-titled debut, Doug has teamed up once more with the ever-cool Trouble In Mind label to deliver ‘It Calls On Me’, a considerably less troubled transmission from our man in Massachusetts.

The overall mood of ‘It Calls On Me’, like most of Doug’s work is somewhat melancholy and he clearly remains a seeker of truths. The plaintive messages in the songs are littered with ‘if’, ‘could’, ‘try’, ‘find’, ‘time’ often wrapped in sublime multi-tracked harmony. There also remains a sense of distance between Doug and the listener when engaging with these finely crafted songs. This is reinforced by the record sleeve, which looks all the world like one of those 1970’s private press jobs that the late Patrick Lundborg so enthusiastically catalogued in the Acid Archives book. Doug is a man alone and apart, looking out into the distance like he is waiting for someone/something to arrive. It’s a hugely symbolic image when taken in the context of the music enclosed. Doug is giving you something to consider but not necessarily inviting you in. An interesting paradox that adds a layer of mystique to his work in my opinion that many others fail to capture.

Much of what has made Doug’s output such a joy thus far - his dreamy, slightly off-centre psych-folk-pop-rock and exceptionally tasteful deployment of electric guitar breaks - is intact here but has been stripped back further with the aim, I imagine, of creating as pure a mood piece as he can. To this end he has succeeded impeccably on this brief but hugely satisfying record. It is beautifully crafted with great attention to detail and some lovely referencing of the wider psychedelic and rock canon within its grooves. You guessed I love it already, right?

Opener “A Place For You” throws a curve ball with its faded in intro suggesting a space rock journey before being usurped by some lovely sunshine guitar and Doug’s now familiar and hugely chilled vocals floating over the top. It’s a strong start and quickly followed by the chiming pulsing title track, driven by backwards hi-hat, an endlessly downward chiming guitar riff and bass stabs - all ‘Pebbles-era’ psych flashing. A trip. “Make Good Time” is a beautiful hymn-like rapture that manages the wonderful feat of welding ‘Goin’Back’ by the Byrds to ‘A Message to Pretty’ by Love and is probably the single most beautiful moment on this remarkable record. And this is where much of the record dwells, in a hazy shade of winter, divining the spirit of the late 60s and early 70s and alchemically bringing it to a very ‘now’ sound. “These Times” is pretty and pastoral, a lovely acoustic driven piece with martial beat and those floaty double tracked vocals. “Painted Eye” is psychedelic and has an almost done/kosmiche vibe to it and reminds me very much of the second LP by Soundtrack of our Lives, "Extended Revelation" with its slow deliberate tempo, slide motifs and a killer’ in a meadow-lea’ stun fuzz guitar solo bursting into your ears. A real beauty.

“Falling to Believe” again has that wonderful signature slow sigh vibe that Doug has become a master craftsman at delivering with a truck load of soul and includes a sublimely clever referencing of David Gilmour’s solo from ‘Time’ in the guitar break which given the subject matter of the song is another indication of how much love and care has gone into this record. “Saturday-Sunday” is the longest track on the record weighing in at around 7 minutes, its warm keyboard refrain driving the tune and underpinning the soothing vocals sitting above imploring you to let your Saturday surround you like a blanket of goodwill and restorative power. It’s another winner, especially as it disintegrates into the ‘Sunday’ section - an extended motorik vamp of acoustic guitar, kosmiche drone and pulsing bass riff.

Matters are brought to a dense, jarring, fuzzy conclusion by the spectacularly brief “Where Will You Go” which breaks down and disappears into the ether almost as soon as it has arrived.

Ultimately, I think of ‘It Calls On Me’ as a giant paisley coloured parachute that glides you down through a shimmering winter sky, gently drifting to earth and offering assurance that whilst much of life remains unresolved your landings will be soft and ultimate destination will be the right one. Doug Tuttle has put down a marker for those issuing new works this year and everyone should take note. This one is a keeper.