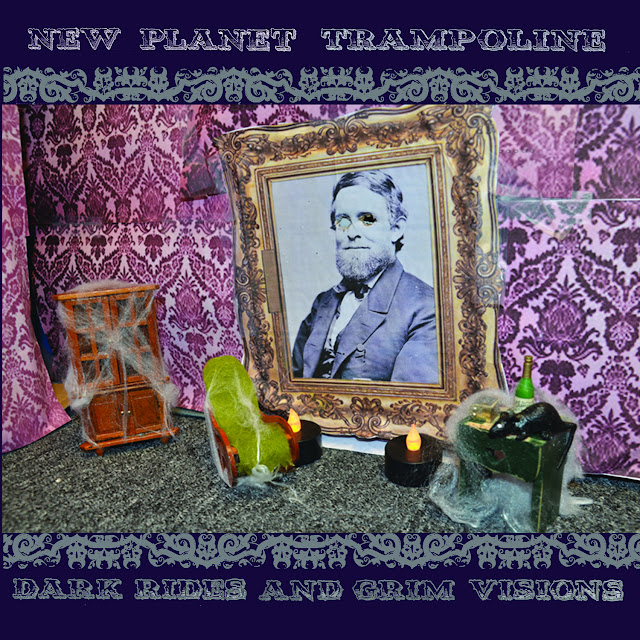 Those who've been lurking around the psychedelic fringes for ten plus years may remember this Cleveland, Ohio based band, responsible for the excellent 2004 release "The Curse of the New Planet Trampoline" (released on Elephant Stone Records no less). It was always intended for there to be a follow up, but for one reason or another the double length "Dark Rides and Grim Visions" was never completed and the band broke up. That wasn't the end of the story though. Eight years later the band reformed and set about restarting and completing this lengthy opus, offsetting these activities by performing "Piper at the Gates of Dawn" in its entirety at the 2014 Austin Psych Fest, supporting King Gizzard and the Lizard Wizard and Jacco Gardner, and releasing a brand new EP showcasing a proggier, more explorative vibe. All notable achievements you'll agree, but "Dark Rides and Grim Visions" is undoubtedly the highest peak the band have scaled thus far.

This is some dark, spooky neo-psychedelia - not any of this indie with psychedelic effects business - but full blown psychedelia, an updating of the sound that embraces the adventurous, occasionally nightmarish spirit of the original movement, rather than borrowing its trappings to disguise tired old tropes as many others have done recently.

The age-old, Eastern melody doubled with vocal and organ trick is done perfectly on "Birds". Those Eastern scales are evident elsewhere too, and have every drop of exotic drama wrung from them - check out "Dark Ride" - a kind of Eastern psych "Dig Lazarus Dig" for this demonstrated at its very finest. There's plenty of variety on display here too - a necessity for an album with this much ambition and scope. The band prove as adept at channelling garage punk influenced fury as they do quieter, more calm moments. And while the raw power of tracks like "Pollution (Circles & Snakes)" and "Confidence Man" offer an undeniable visceral thrill, it's on the more reflective moments that New Planet Trampoline really take my breath away, with the suppressed tension-building of "Acts of Mania" a particularly impressive demonstration of quiet intensity, while "This is the Morning" is just one of the most lovely songs I've heard this year; irrepressibly jangly with hazy harmonised vocals all buoyed by a lovely Beatlesque bassline. Fab.

There's so much treasure to be found here that I could keep rattling on about it for days but you'd be better off investigating for yourself.

The vinyl LP from Stow House Records is a really lovely package too. Double, coloured vinyl in a thick glossy sleeve with intricate sleeve art that perfectly fits the dark majesty of the music it contains, with more than enough visual stimuli to keep the multitasking listener absorbed. Top stuff with my highest recommendation.

CD, digital and vinyl available here (UK/EU) or here (US).