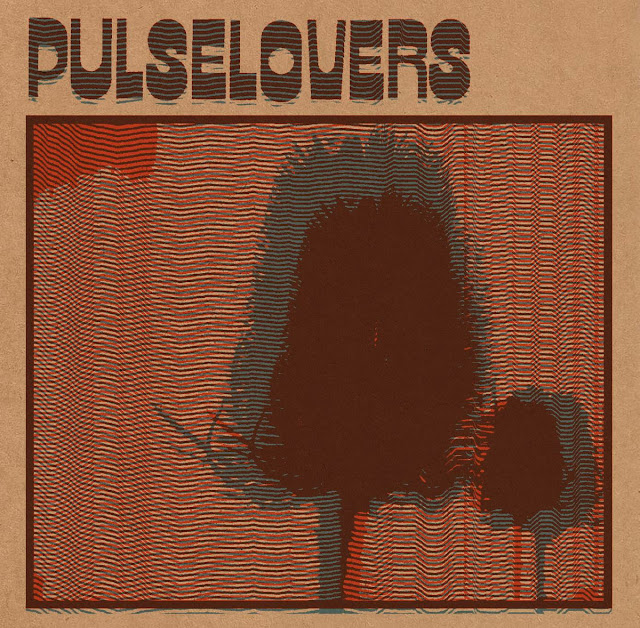 Pulselovers, the project of Doncaster based musician Mat Handley (who also hosts the excellent 'You, The Night And The Music' radio show), is described by its creator as 'the culmination of 30 years of procrastination'. Perhaps so, but maybe also the conclusion of much careful construction, effective intuition and perfectly chosen collaboration, resulting in this superb and richly detailed début album that by turns astounds, affects and impresses.

Instrumental 'Ronco Dream' opens the album in a beautiful though ominous sci-fi haze of drone and keyboard mists, with a carefully picked guitar (by Graham Sutherland of Fallen Trees) shimmering throughout. It's a seriously atmospheric and effective introduction to the album ahead and recalls the majesty of This Mortal Coil and fellow 4AD artists in its swirling, otherworldly grandeur. This is followed by the percussive and motorik 'It's All In The Detail', electronic clicks and echoes driving the song ever forward accompanied by glacial keyboard washes, piano (by Mat's son Raven) and suitably anthemic vocals from Handley himself. A warning about environmental collapse, it has an underlying sense of dread whilst retaining a pulsating power and the feel of the epic. Next, 'Soundtrack 5' is a dark slice of electronica; vintage keyboard sounds growing and layering amongst reverberated percussion and analogue harmonies. With a hint of the icy, Ballardian scope of John Foxx's classic 'Metamatic' and Ken Freeman's theme to BBC's The Tripods' this track is perhaps best listened to on a long, night-time drive through the cityscape. Allan Murphy of fellow electronic experimentalists Midwich Youth Club adds further synthesis and the track itself is a triumph, a gliding frozen thing of beauty. 'Saturnalia', based on the ancient Roman tradition of bestowing slaves with wine, food and gifts for one day in order to keep them better in submission for the rest of the year (and with a hint that this practice may still be used by our political masters), is a spoken word piece adorned by a rich tapestry of synth strings, echoed guitar and hypnagogic sounds; a veritable electronic symphony that drifts and floats lysergically throughout to superb effect.

'Last Day Of Summer' begins with the sound of birdsong and a ship's horn before transcending into an electro-raga, the buzz of sitar and eastern melodies echoing across a vast landscape of sound. Written by Handley during a two month stay in India this stands as an album highlight amongst many fellow gems. 'Spirit', a twisted love song with vocals by Craig Manga (of MangaBros) lifts inspiration from early 80's synthpop and is all the more effective for it, a heartbreaking Depeche Mode style melody lifting the hairs on the listener's neck whilst provoking a tear or two. 'Autumn Arrives' is by turn a delicate and lovely track that swells, ebbs and flows gently throughout; a mood of quiet resignation and reflection permeates as the melody makes a permanent and welcome home in the listener's memory. Fans of the Ghost Box label, the afore mentioned 4AD roster and acts such as Concretism, Midwich Youth Club, The Heartwood Institute and Polypores will find much to adore here. 'Phantom Cinema' changes the pace dramatically, roaring into life on a pulsating keyboard bassline and an insistent cosmiche drumbeat. Hugely thrilling, this ably demonstrates the scope of Pulselovers powers; by one turn haunting and wistful by another driving and anthemic, this is an album of diverse and consistently fascinating musical jewels. 'Red Eden, White Nights' introduces the highly effective vocals of Blurred Girl from Promenade Cinema which gives the track a 60's beat sheen, whilst album closer 'Flatlands' is a tense, guitar and organ driven piece of carefully wrought atmosphere and mood, an electronic travelogue.

Pulselovers then is an assured, mature and sophisticated début that comes highly recommended for lovers of electronica, hauntology and highly atmospheric, emotionally charged music. This music is alive with possibilities and imagery, its pulse is beating strongly, rhythmically and determinedly here; seek this out.

Available now on a professionally duplicated CDr with individually hand silk screened artwork from Nick Taylor and as a download from Pulselovers Bandcamp site.