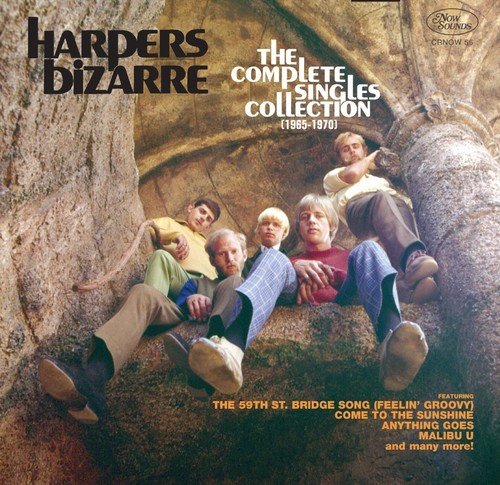 Harpers Bizarre seem to have a hard time getting kudos from critics and collectors alike, often written off as a sort of pale imitation of their biggest competition in the sunshine pop stakes, the Association, but there's more substance on display here than you've been led to believe.

Their criminally under-rated (and hard to find) third and fourth albums are still the place to find the band at their best, but this excellent new collection of complete A & B sides from their prime years certainly paints an impressive picture that most likely doesn't correlate with the one that you've built up in your mind.

Things kick off with some surprisingly Beatlesque rockers from the time when the band were recording as the Tikis (and following pressure from another band of the same name, the Other Tikis). These sides offer a glimpse of an intriguing garage / beat alternative future which the band were surprisingly adept at.

These early singles were enough to get the band signed to Warner Bros. where Lenny Waronker took the band under his wing, producing and arranging four albums and numerous singles. The band struck it big straight away with Waronker's inventive arrangement of Simon & Garfunkel's "The 59th Street Bridge Song (Feelin' Groovy)", but his subsequent choices of material were hit and miss. Covers of Cole Porter and Glenn Miller tunes must have seemed hopelessly out of touch at the time, and no doubt have partially led to the band's middling reputation now. Fortunately these missteps make up only a fraction of their output featured on this collection, with material from up and coming songwriters like Randy Newman, Harry Nilsson and Joni Mitchell being more representative.

As Waronker began to embrace the psychedelic vibes of the times things get progressively more interesting and diverse. While pure sunshine pop fare like "Malibu U" and "Come to the Sunshine" are flawless examples of the form, highlights for me all come in the more adventurous second half. "Witchi Tai To" is an inventive vocal arrangement of a Jim Pepper tune (derived from a peyote song of the Native American Church which Pepper had learned from his grandfather) with a delicate, gossamer production. The theme song to the Peter Sellers film "I Love You Alice B. Toklas" is a great piece of Eastern tinged psychedelia. Then there's a radical rearrangement of "Knock on Wood" which is an absolute stunner, gentle and trippy in equal measure.

And there's a lot more to investigate among the 26 tracks found here. It's time for a reappraisal of Harpers Bizarre I reckon, and this makes a very fine 'exhibit A'.