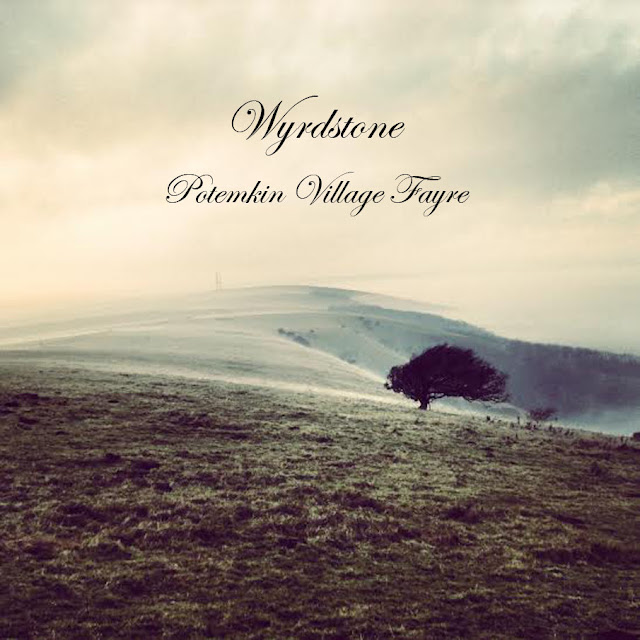 Wyrdstone is the psych folk alias of the hugely talented Clive Murrell whose début release under this name was back in 2009 on the Reverb Worship label (simultaneously issued as a part of a psychedelic folk triumvirate alongside Sproatly Smith and The Hare And The Moon's first outings). This début 'Cuffern' was a thing of wonder and beauty indeed, an accomplished and bewitching instrumental guitar opus that recalled such luminaries as Jansch, Martyn and Fahey. Aside from appearances on the 'Songs For The Black Meadow' compilation in 2014 and 'The Active Listener's First Acid Folk Sampler' in 2012, all has been quiet in the Wyrdstone world since (although alter ego 'Oortcloud' released a splendid kosmische synth album in 2010). Now however, we can enjoy 'Potemkin Village Fayre', Wyrdstone's second long player and, quite frankly, now also their second essential listen.

The album begins triumphantly with 'The Horsemen', a wail of Uilleann pipes and a resounding drum leading into a delicate but thrilling cascade of guitar fingerpicking and flanged notes. The track builds, layering and becoming yet more exciting as the rhythm gathers pace before ending with a flurry of whistles and harmonies. Fans of John Renbourn and the psych whirlwind of Six Organs Of Admittance will adore this. Next, 'Ferring Rife' is a more reflective but equally dynamic piece, Murrell's deft finger picking propelling the track along in its sepia tinged nostalgic beauty. 'Thelema' adds a degree of tension and urgency, darker bass notes hovering over the chiming, harpsichord sound of the guitar arpeggios. Curiously, this has the effect of reminding me of the music used in 70's apocalyptic dramas such as 'The Changes' and also of the rustic and slightly sinister soundtracks to children's shows of the era such as 'Trumpton' and 'Camberwick Green'; there is a vintage and yet timeless feel at play here which is both hugely atmospheric and pleasingly eerie. 'Meditation On Lost Gardens' starts softly with gentle acoustic reverie and the sound of of birds singing, a hazy slice of late summer that reminds us just how wonderfully varied the compositions Wyrdstone creates from his chosen instrument can be. 'Wapple Way's strident and reverbed processionary six string waltz is both graceful and hypnotic whilst 'The Ambient Sounds of Seaford' utilises field recordings of local residents alongside a carefully crafted multi tracked acoustic symphony to transport the listener into another world entirely. 'Spectral Bells' is a dark, echoed and twilit organ refrain that leads directly into the superb 'Pucelancyrcan' which, with its plaintive recorder and guitar melodies, seems to be a conduit into the land for something very ancient indeed. 'My North Star' is an album highlight, an immensely emotive and carefully wrought acoustic piece of glistening beauty that remains with the listener for a long after its final notes have resonated. For Wyrdstone does not need vocals or words to connect, affect or move those listening; it is all communicated through the music. And what music it is; this could very well be the soundtrack to all your future walks and rambles, all your nights spent gazing at the star filled sky and all your wanderings along the edgelands and coastlines of this isle. 'Beckett Window, Canterbury Cathedral' is a melancholy and majestic piece that recalls the nimble and expressive fingerwork of fellow guitarist James Blackshaw while album closer 'Collimating' adds a rare outing for Murrell's vocals to powerful and haunting effect, the swell of keyboards and thunderous drums finishing the album in spinetingling style.

This is an album of rare creativity, beauty, wonder and emotional impact. That Murrell achieves this almost entirely with his guitar work is a triumph and speaks greatly of his ability to conjure up feelings and imagery with his playing. It would be a crime for this release to go under the radar when there is so much to recommend it; get thee to Potemkin Village Fayre.

Available now at Wyrdstone's Bandcamp page. Do also seek out his first release 'Cuffern' which is equally superb.