Firefay - The King Must Die 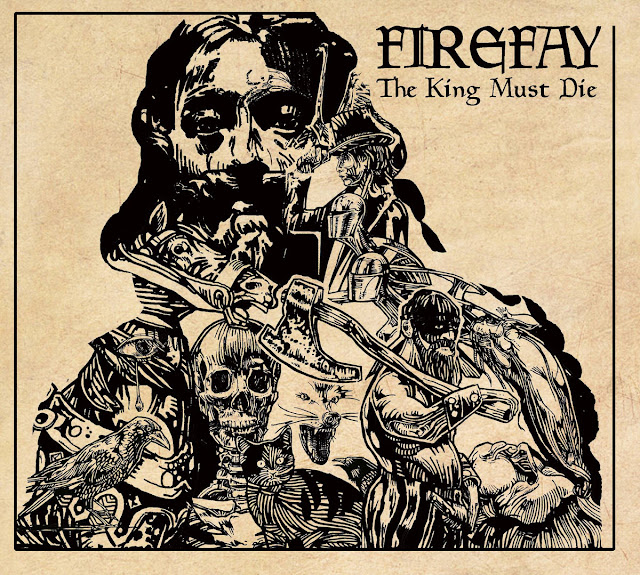 A very welcome and much anticipated release, Firefay’s latest ‘The King Must Die' is the follow up the superb and critically acclaimed ‘Anointed Queen’ (with folk legend Alison O’Donnell). The London based band present another deeply engaging and inventive take on psych folk that marries elements of Fairport style folk rock with elements of, in their own words 'urban baroque, world folk noir, jazz and chanson music'. From the outset this listener is not afraid to say that he fully expects this album to be amongst his favourite of the year, there is an incredible thirst for creativity here and an ability to create musical worlds that transport the listener to a different headspace altogether. This is not your standard, backwards looking folk rock album; this is the sound of folk going forwards.

Opener 'Winter Son' combines Morricone-esque, Western style guitars with an ever building and developing storm of a song that combines a chanted, folk inflected vocal (that reminds this listener of Art Bears in its delicious spikiness), swooping and sawing fiddles, bursts of psych fuzz guitar and an eastern musical touches that add an ethereal and sacred element. Believe me, this is breathtakingly good. The clamour of guitar riffs and ever more intense vocals ends the song on a superbly dramatic note before 'Ti Punch' enters, its French chanson providing a sudden and engaging change in style. Hugely atmospheric and with echoes of Françoise Hardy's melancholy and stately majesty, this simply serves to illustrate the ease and control the band have over their muse; that they can incorporate a number of different genres and elements but still be distinctly and uniquely Firefay. 'La Dame Au Chats' begins with a dreamlike shimmer of strings before Carole Bulewski's vocals enter and the song hastens on a bed of mariachi trumpet and 60's style beats. 'House On The Strand' takes us somewhere else entirely once again, an analogue buzz merging with dramatic piano flourishes and vintage synth bubbling. A hint of chanson hovers over the unfolding tale, a ghostly paean that unsettles as much as it delights. Fans of Broadcast, Stereolab and Belbury Poly will enjoy this as much as lovers of Pentangle and Sandy Denny.

'My Lady Carey's Domp' continues with the 60's John Barry Beat Girl vibe but adds a beautiful klezmer violin passage and some double bass and guitar work that Bert Jansch and Danny Thompson would be proud of. A jazz inflected interpretation of the murderous Child Ballad 'Long Lankin' follows, ominous strings and a gorgeous vocal combining to create an otherworldly telling of the tale that ends suitably with squalls and runs of wild violin. 'Un Jour Ou L'Autre' is a melancholy and tense perfect piece of French Yé-yé whilst the album’s title track is a medieval opus that wears its love of 'Leige And Leif' proudly on its sleeve and is an album highlight; a song of grandeur and majesty that sweeps and swirls through the ages. Next, '(Le Llamaban) Luna' is a heartbreaking lament accompanied by a loose beat and orchestration that reminds this listener of Françoise Hardy's classic 'La Question' album in it's sense of suave yet serious sorrow and loss. The album closes with 'The Djinn's Tale', distant synths echoing and growing closer until a wail of backwards electric guitar leads into a carefully finger picked acoustic motif. Tabla enters and the song begins, a tale of legend and mystery effectively conjured by its musical setting. This is a thrilling and satisfying end to what has been an incredibly diverse and masterful musical journey.

Trust me, you will not hear another album like this one this year or the next (or at least until Firefay return). It would be a sin for a recording as as accomplished and wildly creative as this to fall under the radar, do not let this happen. All hail the king, let Firefay take you into their own unique richly rewarding world.