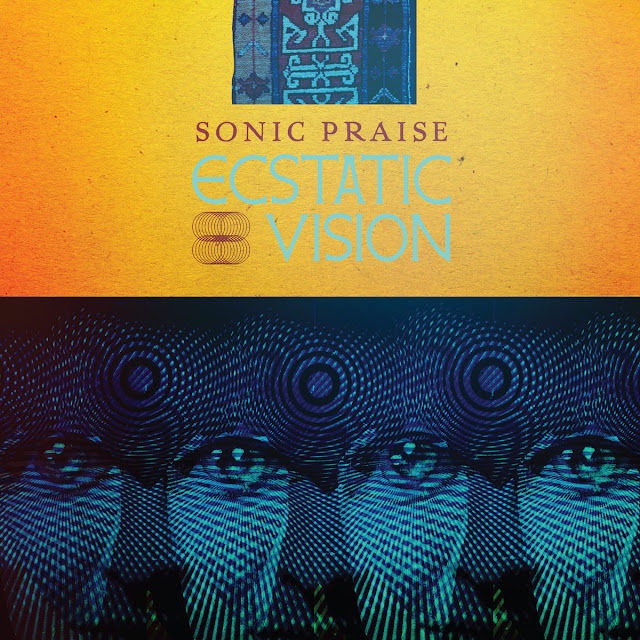 Like the record collections of Philadelphia, PA’s Ecstatic Vision must, so their debut, “Sonic Praise” – out at the end of June from Relapse Records – draws from an eclectic source. Like – you’d hope – most musicians, the band’s members were listeners before they were ever players, wading into the deeper end of ‘70’s overflowing pools: Space Rock/Krautrock, Prog, Afro-beat, Metal. And it’s apparent they were listening closely. So, whether you hear Ash Ra Tempel, Blue Cheer, Agitation Free, Motörhead, Fela Ransome-Kuti (especially his album “Zombie”), or Captain Beyond, there’s a long line of influences that has been carefully distilled into each track: poly-rhythms, forceful bass lines, guitar freak outs – and a bit of flute and sax – and madcap organ. It’s a potent concoction. While the album allows for plenty of aural freedoms, it – unlike many current heavy psych releases – feels driven, even propulsive, meticulously practiced while still feeling free. There are no stagnant moments across the debut’s five long tracks.

Rhythmically, Ecstatic Vision keeps a strong hold throughout all five, long tracks. They keep a tight, dynamic grasp on each song’s forward motion, even as everything else swirls, unbound. Bassist Michael Field Connor and percussionist Jordan Crouse lock into a hypnotic groove while guitarist/organist/vocalist Doug Sabolik strangles every lysergic drop from his guitar and leads congregants in a kind of primal chant that beseeches enlightenment. For the trio, this is a promising homage to their influences from decades past while a big stride forward for modern heavy psych.

As an opener, “Journey” is a fine introduction to Ecstatic Vision’s power, though it’s a bit friendlier than the four following tracks: spectral voices lead us unknowingly toward a heavy – well, very heavy – feint, a simple progression off set by a persistent bass line and Sabolik at the forefront – and it all sounds a bit more like Pentagram than Can. However, by the two-minute mark, it’s clear you’re in for something else as layers of effects and organ soar toward a far off lunar peak – and by album highlight, “Astral Plane,” and its carefully plotted ascending jam, we’ve even left those peaks behind.

“Sonic Praise” is available digitally, on CD or in various vinyl colors on Ecstatic Vision’s Bandcamp page (below) or as a bundle from Relapse Records. If the sampling on Bandcamp isn’t enough, the full album is streaming on Spin.