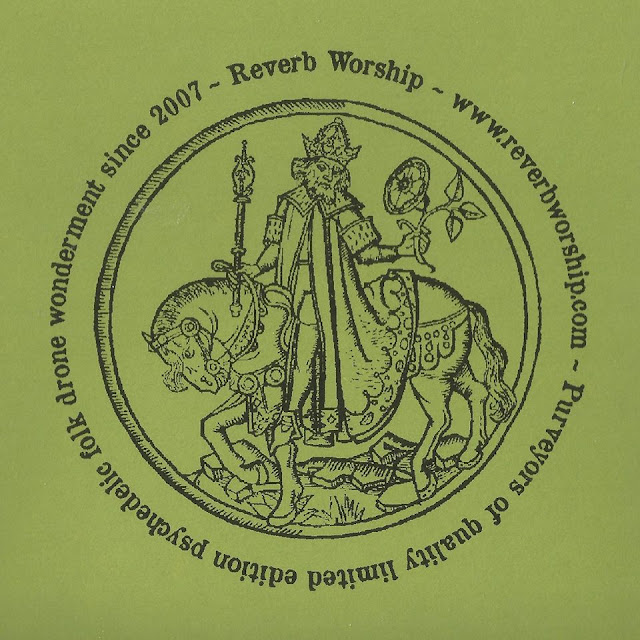 Roger Linney's Reverb Worship label is now in its eighth year of releasing excruciatingly limited, and unfailingly interesting albums from the cream of the current underground. That being the case, it's a wonder it's taken this long for a bit of self-celebration, but the wait has been very much worth it, with this two disc collection providing a fine overview of the label's scope over its 28 tracks.

By rights, this should sound like a bit of a disjointed mess. Reverb Worship have an incredibly eclectic roster, with the only prerequisite being that Roger has to love the music being produced. This then, is an unpigeonholeable collection, containing acid-folk, psychedelia, menacing ambient drones, and all sorts of other lovely underground gems, which it's very unlikely that we would be listening to had Roger's canny ear not heard them first. There's such diversity here, that it really is surprising quite how well everything flows, and what a cohesive listening experience it adds up to.

For those new to the label, this is the place to start. And for those who have already dined at this table, this will be a treat for you as well, comprised as it is almost entirely of rare and unreleased material from Reverb Worship affiliated artists.

It's often quite spooky, with ominous drones and haunted folk aplenty, but there are also moments of real beauty. James McKeown's "Falling" for instance, is a glorious thing; originally recorded for his "Sublime Knight Elect" album, it wouldn't have quite fit there, but its glistening guitars are a real highlight here.

Syd Barrett's influence continues to permeate, with enjoyable covers of "Dark Globe" and "Matilda Mother", but it's the original material (which is almost everything else here) which really impresses, particularly the ghostly, psychedelic choral work of The Gray Field Recordings, which sounds like "The Shining" on LSD -  delightfully creepy, but also quite lovely.

This and many other gems await the discerning listener, but as always Reverb Worship editions are printed in very limited numbers, so get in quick. Investigate the tracklisting in detail, or order here.

Check out the Howling Larsons' version of "Matilda Mother" here: