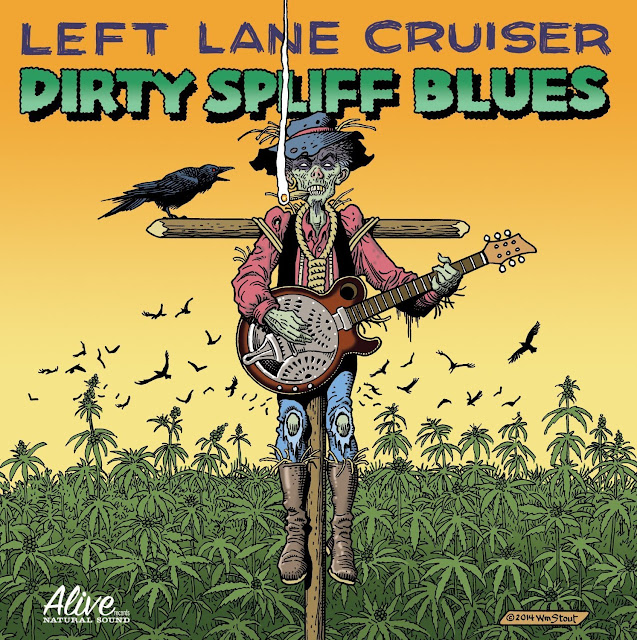 After ten years of playing as a duo, Left Lane Cruiser has added a third member for their sixth album, “Dirty Spliff Blues” from Alive Naturalsound Records. The Fort Wayne, IN group’s latest is about what you expect from them after a decade’s worth of records – duo or trio. That is, for those familiar with them: punk blues songs that draw from the Mississippi delta and sweat swagger. For those unfamiliar, while it doesn’t quite reveal the depth of these tracks, a lot can be assumed from the cover art (by William Stout), album’s name – and the band’s name, for that matter. This one’s for those looking for gritty guitar riffs – or “skateboard slide guitar” too.

“Elephant Stomp” is an album highlight. It saunters through a rock riff that channels Southern heat; it’s bluesy and a bit messy in all the right ways. And “Whitebread n’ Beans,” which follows, doesn’t let that humidity drop at all. It all builds to a wild slide guitar solo on “Tangled Up in a Bush,” which closes a very strong passage of the album – which is not to say they slow it down at all through the remainder. It’d be too easy to call this rock n’ roll because there are enough oddities to throw anyone off; either way, it’s a fun ride at full speed.

This is a very strong release from a well-respected band, who have continually gathered fans over the years – as well as a song slot on “Breaking Bad.” No doubt “Dirty Spliff Blues” will garner them a few new ones. For this listener, it took a few listens to really dig into these tracks, for the simplicity of the songs is a bit misleading, but sonically there’s some real depth – and certainly a lot of energy.

It’s out now on Alive Naturalsound Records, available digitally from iTunes and on CD or limited edition starburst vinyl (link below, where you can find most of their back catalogue too). They started their tour earlier this month too; find them live, if even a fraction of their frenetic presence has been captured here.