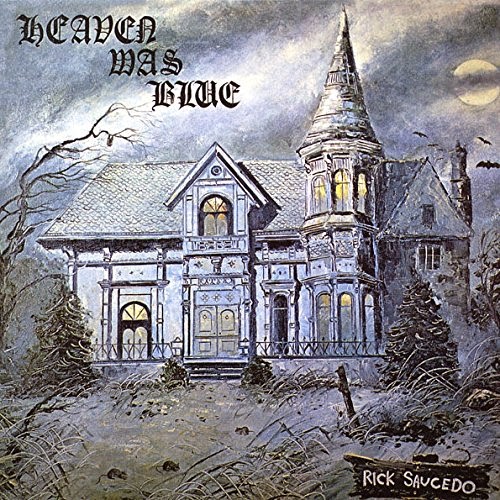 Rick Saucedo had already established a successful career as an Elvis tribute artist when he recorded "Heaven is Blue" in 1978. For anyone aware of this association at the time, the resulting album must have come as quite a shock.

Legend has it that Elvis's death was the catalyst for this ambitious project, completed mostly alone by a multitracking Saucedo, with the help of a few friends. That aside, there's not a trace of the King's influence here, with the Lennonesque delivery and complex, mysterious song structures instead pointing towards an acid laced psychedelia at its commercial peak ten years earlier. Quite who Saucedo thought would buy "Heaven is Blue" back in 1978 is a bit of a mystery, but fortunately a few did, and its legend (fuelled by its obscurity and rumours of sinister, possibly occult undertones) has grown substantially since.

Double barrelled opener "Reality" "In My Mind" is a lovely spectral thing, full of curious, interweaving guitars and vocals, and odd Radiophonic keyboard textures. Saucedo's vocals are surprisingly subtle too, more Californian folk-rock than Vegas shazam. Two rather pedestrian rock n roll numbers follow, doing their best to unravel the rich tapestry just woven, but all is forgiven and forgotten when the record is flipped over for the astonishing side-length title track. Nearing nineteen minutes in length, "Heaven is Blue" is a startlingly well put together labour of love; a mini suite of psychedelic folk-rock which borrows from the conventions of progressive rock, without falling prey to the genre's potential pitfalls.

This new Guerssen reissue is the first official vinyl reissue of this increasingly well regarded collectable. Included are several different single mixes, two tracks written for the album but not recorded until the nineties (which fit surprisingly well), and one genuine lost classic: "Oh My God", a sitar laden, Lennonesque folk-rock number, pulled from the original release at the last moment. Had this graced the original in place of the two generic rock n roll numbers alluded to earlier, this would have been nearly flawless.

It's great to see a reissue of an obscurity like this which can add to its legacy, rather than dilute it. Highly recommended, even to those who own copies of the original release.