Hypnodrone Ensemble "The Shape of Space" 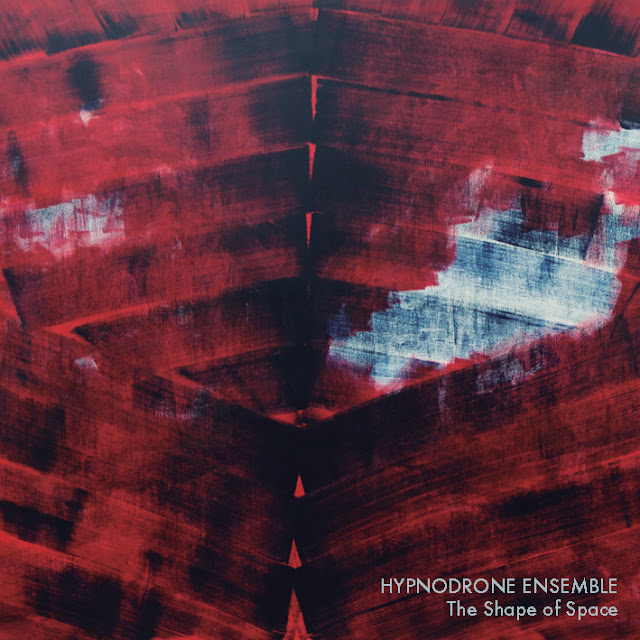 Hypnodrone Ensemble is a relatively new project from Nadja, Caudal and B / B / S guitarist Aidan Baker and thisquietarmy’s Eric Quach. Formed in 2014 for a performance in Berlin (a recording of which was released by Belgian label Consouling Sounds), Hypnodrone Ensemble garnered some interest, playing Incubate Festival in Tilburg, Netherlands. This year sees their first studio recording, “The Shape of Space,” from Little Crackd Rabbit (CD) and Calostro Recordings (LP) and recorded at Golden Retriever Studios in Berlin. If you’re familiar with either guitarist’s work, you know they’re more than capable and versatile players; they blend wall of sound atmosphere with motorik beats, expressive free form improvisations with heavy space rock aesthetics.

“The Shape of Space” is, to be clear, two long instrumental tracks, with distinct poles each: “Elliptical / Hyperbolic” and “Euclidian / Dodecahedral.” Both clock in around the twenty two minute mark. While Baker, Quach and bassist Gareth Sweeney’s interplay is hypnotic and unforgivingly heavy at times, this is not simply a showcase for their chops (though they are readily apparent); it is, instead, an impressive ambient rock composition that swings through the gauntlet, pulling listeners in and out of the riffs.

Having three of anything could prove a burden, but, from its inception, Hypnodrone Ensemble has embraced three drummers. (You have to appreciate the line-up, which lists “drums” after three of its members’ names, refusing to euphemistically say “percussion” or something else.) And Dunnett, Mortier and Salazar are good at what they do. Completely in control, the three work together – most of the time in powerful sync – following the ebb of the guitars, holding down expressive motorik beats or falling around a loose passage. At their best, however, the drummers tumble through a pounding free form build, occasionally letting one fill in the breaks while another holds steady.

This record is for fans of guitarists whose crowd of pedals sit at their feet, punched and tweaked endlessly, rattled until otherworldly and dense atmosphere leaks from somewhere else. The result is a master work of precision and improvisation that’s mesmerizing while remaining surprising in its turn.