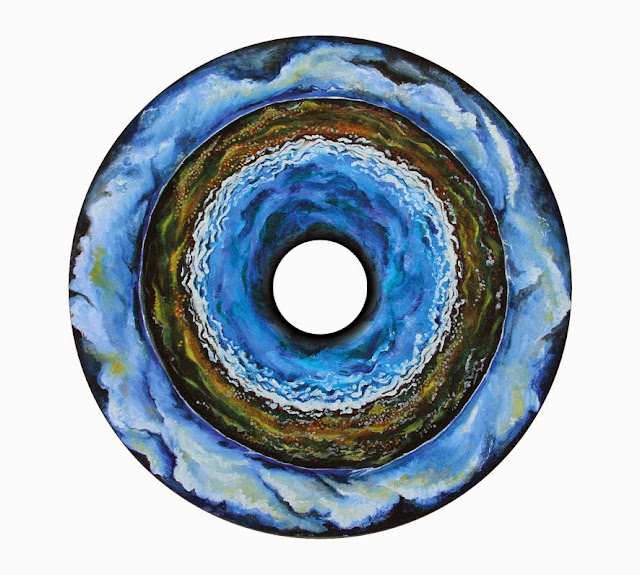 Musician and composer Alex Monk has created a small but beautiful body of work focusing on sound and song as a means to evoke particular moods and memories using both electronics and organic instrumentation, often manipulating or using the voice as an instrument in itself. His new release, 'Fragments of Lost Rivers', is a part of a multi media project, the audio element of a installation piece of sound, film and sculptural forms that will ultimately contain ceramic fragments creating a labyrinth or maze. Monk writes that 'the work raises issues of our environment and the significance that nature has in informing and symbolizing our mythic understanding of our lives. It looks at questions of how we treat the earth and particularly the water upon which we all so deeply depend.' Using field recordings of rivers from as far apart as the Thames in Monk's native London and the Phong Nha cave in Vietnam, this is a very special and heartfelt album indeed; a document of natural beauty and surging life force in both rural and urban settings. Reminiscent of singer Rob St. John's 'Water Of Life' project in its musical intention to convey the elements of nature through sound, this is a work that is thought provoking, sensual and, quite frankly, essential listening.

The piece begins with birdsong and the sound of a river flowing, a rustic gentleness which then merges into a delicate acoustic guitar melody filled with both wistful melancholy and warm nostalgia. The notes are crystalline, passing by like the water that inspired the work; timeless and endless. This is not ambient music however but music for the foreground, to focus on and immerse yourself in. As this segment fades into the ether, keyboards enter alongside windchimes and harmonised vocals, reminding this listener of some of the mood soundscapes of Nick Grey. It is as if we have reached a point where the water is rushing by, foaming, powerful and urgent. The sound resounds across and between the speakers until a solitary and beautifully sad, stately drone enters accompanied by Serenella Noseda's ethereal vocals. Otherworldly and yet familiar, this speaks of nature as both wild and unknown and yet also integral and a part of who we are. The sound echoes and reverberates; backwards tapes glide across the waves of vocals and strings until we are left with just Noseda's haunting voice; an elegy to the life force in our rivers and seas. This music is symbolic; just as water and our rivers are symbolized or used as a metaphor to demonstrate significant meanings in our lives, here the music utilizes the roar and force of this water or the splashing and flow to illustrate and introduce each segment of the piece itself. A buzzing, eastern hum fades in from one such field recording, growing in volume and revealing hidden layers and harmonies as it winds and channels its way ever forwards. Analogue synth joins this flow, wave upon wave of electronic layers building until there is a symphony of sound both utterly affecting and uplifting. The birdsong then returns to signify the ultimate finale of the journey, the river's end.

An ambitious, moving and inspiring piece that is quite unlike anything else you will hear, 'Fragments of Lost Rivers' comes highly recommended. Enter the water, submerge yourself and see where the river takes you. Available now as a download or as a limited edition (100 copies) CD that is a piece of art in itself.