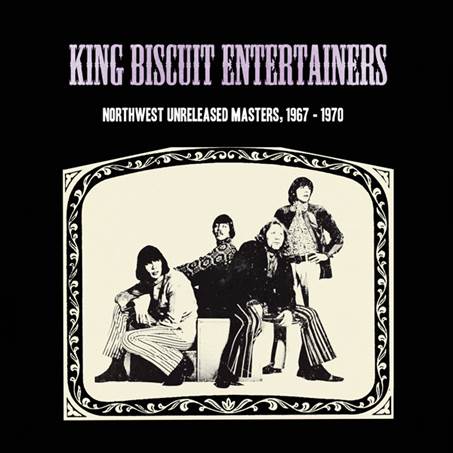 I was quite excited when I was given the chance to review some of Guerssen's June releases as they have a habit of unleashing some hidden gems that I've missed over the years. This is certainly the case with King Biscuit Entertainers, who serve up a nice set of late 60s garage/psych rock here on the Out-sider label imprint. The Entertainers were a Pacific Northwest band active from 1968 to 1971, who released some 45's in the late 60s. This release definitely sheds some light on a very fertile scene, and King Biscuit had to be up there with the best of them at the time.

Let me start off by saying what great threads the band have. The cover features them in all their late 60s majesty. They were dressed to kill, and as they were primarily known as a live band at the time, I'm sure this only added to their blistering sets. The style of the Biscuit’s music is of its period, more than hinting at an Iron Butterfly/Vanilla Fudge style - soul, soaked in psychedelic syrup. A highlight of the group is its rhythm section, which was very tight with an outstanding bassist who has some experimental, fuzzy, overdriven tones. And I’d hate to forget to mention the romping stomping Corky Laing/Carmine Appice drumming which makes for a seat-of-your-pants R'n'B psych ride.

There's some very tasty Hammond B-3 sounds on here that entwine nicely with the sounds of the rest of the band, making it a must for organ-driven rock fans, as well as fans of Fender tones. The album gets off to a great start with “Take Me to Chicago” with a catchy 60s Box Tops / Mamas and Papas vibe with ringing, Byrdsy Rickenbacker guitar. I’m sure this song could have gotten airplay at the time. “Now Baby I Love You” was released as a 45 in 1968 and is an absolute killer, with fuzz-bass and a bluesy strut where the instruments drop out periodically to highlight the vocals.

The band was more than another average Iron Butterfly knockoff, and there’s some infectious Beatles and Nazz Anglo-pop moves to go with the R'n'B and blues riffs. On songs like "Rollin' Free Man” there’s a Deep Purple style chug and intensity, which sounds like a precursor to the sound Captain Beyond was streamlining a few years later in the early 70s.

The guitarist leans on the heavy-impact octave riffs and the drums sound huge. "Rosemary's Second Child" brings out a slower, bluesy, late-night deviant atmosphere. But of course the Biscuit pumps up the beat and there is an intense middle section with some tricked out crunchy rambling lead. “Judgement (Look Up And Get Ready)” has some great background vocals with a falsetto that, mixed as it is, sounds like female background singers, which is kind of cool. There are also some guitar harmonies that, for this period, show these guys had serious chops. Only one track was recorded in 1970, the rest are from '68 mostly, with two '67 cuts (one from a 45 release).

King Biscuit Entertainers only had three singles out in the 1960s which are very difficult to obtain in a physical format now, aso this is a very important document, which shows a great band in a very storied transition period between the psychedelic boom and the shift to early-70s hard rock from soul and pop. There are noo real philosophical or mind-benders here, more the onslaught of a group of guys who were screaming to break into the next decade as a classic hard rock act. Fans of organ and guitar interplay will want to give this a listen, as well as fans of Trapeze, Armageddon, and Deep Purple.

Available here (US), or directly from the label here in Europe.