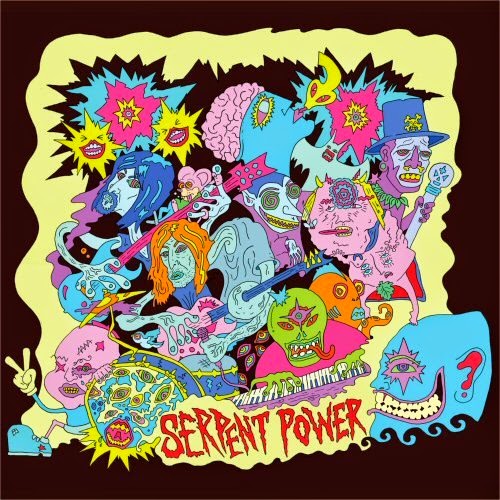 After the release of his mainly DIY, neo-psychedelic tour de force "Cut From a Star" – and first album unanchored from The Coral – Ian Skelly seemed poised for a major solo breakthrough. The 2012 project – lovingly crafted over a 10-year period and featuring Skelly’s vivid, image-driven songs and distinctive cover artwork – was released through the band’s Skeleton Key label to uniformly rave reviews. When Skeleton Key found themselves quickly relieved of vinyl/CD hard copies during the early stages of the album’s initial run, they took the rather bold step of releasing a 2-CD deluxe version of the album in 2013.

Featuring live acoustic versions of six "Cut From a Star" songs and credited to Ian Skelly and the Serpent Power, the second disc seems to have been, in retrospect, designed both as reinforcement of the solo record and introduction of a new backing band. Somewhere along the line, however, Skelly decided to set aside his promising solo career to join forces with Paul Molloy, formerly of the Zutons, to form a formidable Scouse-psych supergroup of sorts, Serpent Power.

Serpent Power is not "Cut From a Star" mk 2.0, although it maintains many of its most endearing hallmarks: Skelly’s penchant for eerie, dark psychedelia and wild imagery is well represented here, both in the music and cover artwork. The cover itself is an intrinsic part of the package. Our heroes are drawn amidst an assortment of grotesque, amusingly macabre comic-book ghouls, such as an eight-eyed bass drum (its mouth agape); a smiling, pointy-eared vampire; and a giant-footed zombie flashing a peace sign. It’s the kind of cover at which you can repeatedly stare and discover something new each time. It’s also a perfect introduction/complement to the music. So prepare yourself: you’re going deep inside the imaginations of Messrs. Skelly and Molloy.

The trio of songs that forms the opening salvo (“Dr. Lovecrafts’s Asylum”/“The Man Who Shrunk the World”/“Lucifer’s Dreambox”) should, from the titles alone, give some indication of what you can expect. Once inside this Serpent Powered world, one is transported into a house of benign aural horrors: there’s an onslaught of creepy organ passages, backwards loops, hypnotic drumming, phased instrumentation and liberal doses of Theremin. The extended coda appended to “Lucifer’s Dreambox” is a particularly sinister-sounding non sequitur.

The fourth song, “Candyman”, hints at a stylistic shift to a jauntier tone. Imagine if John Lennon had demanded to sing “Your Mother Should Know” and you’ll get the picture. The result is both fanciful and unsettling. Similarly, “Life is a Ball” is a pulsing, McCartneyesque music hall stomper whose whimsy is undercut by some chilling Old West-saloon style piano.

The mood of "Cut From a Star" is recalled with “The Siren” in which Baroque-pop elements of "Village Green" era Kinks are mixed with typically Coral-esque chord changes. Speaking of the Coral, brother James Skelly contributes the pleasant “Just a Broken Heart”, which is, for lack of a better term, the most conventional-sounding track of the lot. Other highlights include “Vampire For Your Love”, which sounds like the mawkish love theme from a goofy horror flick, and “Last Ape in Space”, a song propelled by thudding drum rolls and loping harmonies. “The Vision” ends the album on a suitably ominous, unsettling note. It’s gently insistent beat conveys an air of parting amid a somber soundscape – one that goes to fade far too soon.

Whether this is a one-off, stopgap release for Skelly and Molloy, or the beginning of a beautiful new musical partnership over the long haul, the debut album from Serpent Power bodes well for both.