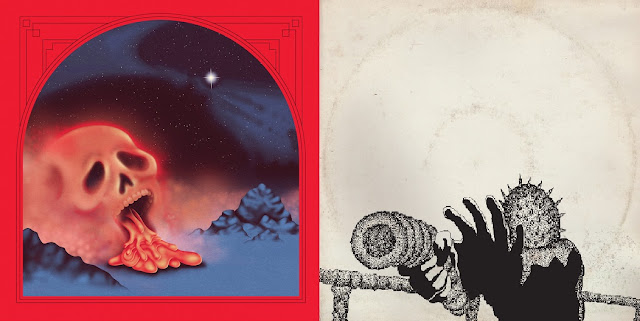 It seems almost irresponsible that in my position, this is the first time I've properly sat down and listened to an album by Thee Oh Sees. You'd think that with such a prolific output, these critical darlings would have crossed my path sooner, but the truth of the matter is that I've always suspected John Dwyer's brand of visceral garage rock would be too damn noisy for my rapidly ageing, and frankly delicate sensibilities. Imagine my surprise then, when enquiring as to what was playing at a local record emporium, I had their latest album "Mutilator Defeated At Last" thrust into my waiting palm.

"Mutilator Defeated At Last" is a very fine record. It's often every bit as loud as I suspected, but it's much more intelligent than I anticipated, adding layers of complexity without losing its visceral edge. A number of these songs, although memorably penned and in possession of beguiling melodies, seem to have been conjured into existence almost solely as an excuse for Dwyer to shower the listener in molten runs of ferocious, reverb-laden guitar shredding, which he releases with ferocious intensity.

And while Dwyer losing his shit is reason enough to dig into and savour "Mutilator Defeated At Last", there's another side to the story too, with a more exploratory set of mid paced songs that weave a spacey, progressive rock element into their already rich garage tapestry. Opener, "Web", is a gargantuan beast of a thing, the aural equivalent of navigating an asteroid field at full speed, but nowhere is Dwyer's new progressive leaning more pronounced than the eerie, organ-led "Sticky Hulks", which suggests a Pink Floyd that managed to keep Syd in its ranks for a few extra years.

I'm won over then, and the nearly simultaneous release of the second album from Dwyer's synth-based side-project Damaged Bug is bafflingly, every bit as good. I was expecting a similar kind of thing to his day-job, with synths where the guitars otherwise would be, but Dwyer is a much more multi-facetted individual than I originally gave him credit for. "Cold Hot Plumbs" is a much more psychedelic, pop-oriented affair, allowing Dwyer to find an outlet for a less aggressive side of his output. The off-kilter pop of Eno's early solo albums and the first side of Bowie's "Low" seem to be the dominant influences, but there's a shiny psych-pop sheen here which sits favourably with the likes of UMO and Opossom too. It's consistently engaging, with live drumming creating a great, heavy juxtaposition against the layers of keyboards and sequencers, really helping to bring these songs to life. And great songs they are too, with hooks everywhere. It may be a side project, but it's not laboured with typical side project material, providing instead a fascinating glimpse of an alternate route that Dwyer could have taken, had he not heeded the call of the garage.

Most artists would be happy to release one album as good as either of these every couple of years.

You need both of these albums in your life.