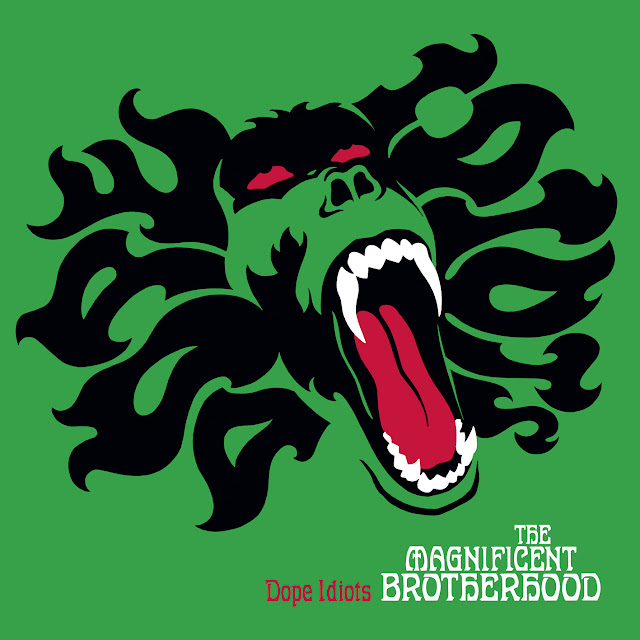 At the suggestion of one of my writers, Jason Simpson, we've re-established the Obscure Classics section of the Active Listener - an outlet for older unmissable albums that you may have missed.
First up from me is Germany's Magnificent Brotherhood who, if  "Dope Idiots" is anything to go by, are indeed magnificent, even if they are fibbing about the brotherhood bit.
Garage psych revival isn't a new game, but the Magnificent Brotherhood play it better than most (not to mention better than many of the original garage psych practitioners).
They're also more fervently devotional than pretty much anyone else I can think of - it's no exaggeration to say that "Dope Idiots" sounds more authentically 1967 than half of the albums released in 1967 do - and this was released in 2011!
The Music Machine, the Count Five, the Seeds, the Electric Prunes - the Magnificent Brotherhood hold their own against their more celebrated forefathers with ease, not something that can be said of many current bands. There's nothing "neo" about them, these guys are 100% authentic and don't let the fact that they were born totally in the wrong era stop them from spreading the garage gospel in the most convincing terms imaginable.
The only thing that doesn't absolutely reek of 1967 is the fact that the Brotherhood don't have a record label breathing down their neck for a new album every six months, so "Dope Idiots" has been given the chance to happen on it's own terms, free of filler. Most sixties outfits would be proud of a hits collection this solid, let alone an album.
"I Want To" is a breakneck opener, with tight start/stop rhythms that betray a more dexterous musicianship than you'd normally expect from garage, but sacrificing none of the pure, animal instinct that separates the legit operators from the phonies. Even the mersey tinged beat ballad "Degenerate" is gritty as hell.
Unparalleled attention to period detail (fuzz guitars, immaculate organ work), are important sure, but it's the impressive songwriting of Kiryk Drewinski and Erik Haegert that clinch it on this one and ensure that "Dope Idiots" is more than just another retro also ran.