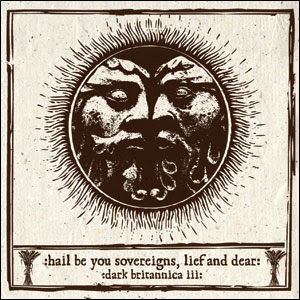 A fourth volume in Cold Spring's Dark Britannica series (although confusingly subtitled Dark Britannica III), "Hail Be You Sovereigns, Lief & Dear" further continues Cold Spring's mission to prove that U.K folk music isn't dead, no matter how mercilessly Mumford & Sons defile it.
There's slightly less emphasis on the dark side to be found here than on previous volumes in the series, with the compilers digging a little deeper than they've previously had to, resulting in a higher count of unfamiliar names and a much more varied selection of music. This unfortunately does result in a less cohesive tome, but if viewed as a sampler rather than a carefully sequenced album in it's own right, there are still plenty of surprises to be found.
The Hare & The Moon's "The Willows" opens things up in a suitably moody fashion, and things get weirder as we progress. The Rowan Amber Mill add a Radiophonic touch to "On Ridgeway Fields" with layers of pastoral seventies synthesizers, while Woodwose's "Frenetique" sounds like something you'd hear on a Sega Master System highland games cartridge.
So not quite as good as previous entries in this series (they set a high benchmark to be fair) but this is still a highly adventurous, evocative, often daft and consistently fascinating listen that paints a portrait of a genre peopled by artists unafraid to take risks, subverting the ancient to create something nebulous and new.
It doesn't matter how many sons Mumford has - they'll never step outside their formula and risk creating something as attention grabbingly odd as this, or I'll eat my hat.