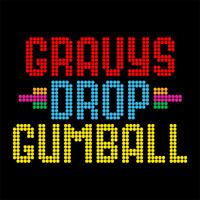 I've come to rely on Burger Records, Spot on Sound and Patrick Haight to provide me with a regular fix of cheesy-grin inducing , good time rock n roll, and Gravys Drop does not disappoint. Burger must be cloning these guys or something - their well is seemingly bottomless.
Gravys Drop is their latest success story, gravitating around the talents of one Billy Grave, a Berkley gent with what I'd assume is a very cool record collection, if the sound of "Gumball" is anything to go by.
Studying Rock n Roll 101? Look no further - here is your musical textbook, study hard.
Grave and co. have done a pretty thorough job here of distilling the essence of fifties and sixties rock (when it still had a roll permanently attached) into an easily digestible little package with enough contemporary bite to keep it palatable enough for the discerning youth of today.
It's easy to imagine a ten year old Billy Grave, tennis racket in hand, acting out Michael J. Fox's "Johnny B Goode" scene from "Back to the Future", especially when presented with the twin delights of the piano heavy raver "Snakebite", and the magnificent "I Get Down", which unleashed a rather geriatric bout of duckwalking from myself, much to the chagrin of my work-mates.
"Singing in the Shower" meanwhile flirts successfully with doo-wop, while the likes of "Velvety Suitor" and "Thinking About You" channel the new wave artists of the late seventies who were themselves reaching back to the late fifties.
And the best is saved til last with "No More Snuggly" an epic rave-up that winds up towards it's climax into a not too distant relation of the Who's "A Quick One" right down to the windmilling guitars and eight armed drummer effect.
"Gumball" ultimately toes the line nicely between respecting it's lineage, and subverting it's influences into something fresh and exciting.

Available soon! Catch them at SXSW and grab a tape before they're on general release.