Foxygen "We Are The 21st Century Ambassadors of Peace & Magic" Review 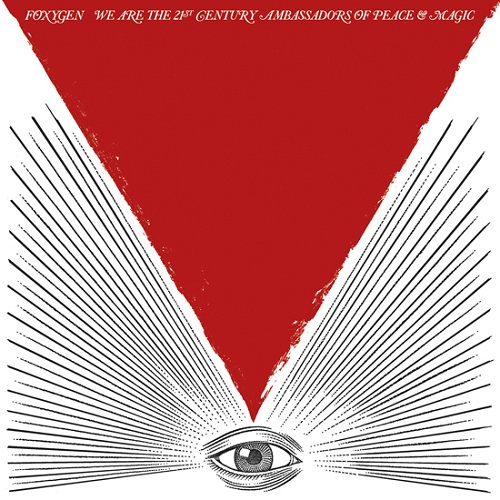 Foxygen's lo-fi debut "Take the Kids Off Broadway" was an ambitious but ultimately chaotic listen that sounded like Sam France and Jonathan Rado were worried that they'd never get the opportunity to record another album, and that they'd better get all their ideas out while they had the chance.
This approach hasn't changed a great deal with album number two, but they've learned an important lesson, namely that you can dress your songs up however you like if they've got a killer pop hook at their core.
This heightened focus on quality songwriting yields surprisingly solid results, making this an early contender for most improved act of the year.
Having Richard Swift on hand to offer guidance behind the desk does no harm either, I'm sure.
Influences are still worn openly on sleeves, but who can blame them when it allows them to reach the majestic heights of the likes of "Oh No", which has an outro that cops both "I Want You (She's So Heavy)" and "Moonage Daydream" without batting an eyelid.
Elsewhere there's magic in the form of "San Francisco" an effortlessly sweet sixties style ballad, with a backing vocal that knowingly borrows a refrain from "It's Only a Northern Song" and piles on the Northern Soul grandeur with unexpected subtlety. A genuinely indescribable cross-pollination of genres and one of the best new songs I've heard this year.
And it's in good company here with the streetwise "No Destruction", and the marvelously odd "Shuggie", with it's Radiophonic synth flourishes giving it a good run for it's money. And then there's the fabulous psychedelic soul ballad "Oh Yeah" with it's karaoke-baiting falsetto vocal, and cheeky "What a Man" guitar refrain, that single handedly outdoes everything on the recent Unknown Mortal Orchestra LP, which is certainly no slouch either.
Never a dull moment and many of these moments are inspired, this is one of the most melodically gifted and cleverly crafted albums I've heard this year so far, and I can't imagine much topping it.

Get the LP here or the CD here.