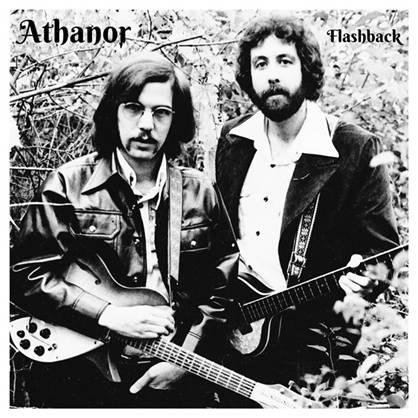 What do you get when you cross a Lennon fixated high school English teacher who now teaches a college level Beatles class with a meticulous harmony fiend with a writing background for Crawdaddy magazine?
The answer of course is Chicago duo Athanor. Pat yourself on the back if you already knew that, because I sure as hell didn't before this Guerssen promo fell into my hands.
Athanor released three 45s in small quantities between 1973 and 1975, most of which went out to record labels and radio station before subsequently disappearing. Enough copies found their way into collector's hands for the seed of a reputation to take root and now Guerssen have emerged from the rock and roll mine clutching another chunk of gold with this essential collection made up of both sides of their three 45s, demos recorded throughout the seventies and early eighties and a new (well, newer) track recorded in 2006.
The three 45s paint are particularly interesting pieces of proto-powerpop, especially considering Greg Herriges and Rick Vittenson's musical interests of the time didn't extend past the late sixties - essentially they were one of the architects of powerpop, but were seemingly oblivious to the fact that they had a peer group at the time.
There's a huge Beatles influence evident throughout, less obvious on the first single which is a fuzzy, but enjoyable relic full of twelve string acoustics, over the top wah wah leads, spot on vocal harmonies and the odd merseybeat style guitar riff.
Things get a whole lot more Beatlesque on "Urizen" - the A-side of their second single which is a much more forceful and psychedelic affair with some sublime backwards guitars.
Last single "Habits" ups the heavy psych factor again impressively but the fidelity of it and it's B-Side are average at best - unfortunate as these are probably the most fully realized tracks that the duo recorded.
Personal complications got in the way of an album being made, but the duo did sporadically get together to demo new tracks which make up the second half of this collection.
They're a surprisingly varied selection of fully fledged tracks that occasionally betray the times in which they were made (especially the abysmally titled, but actually rather good "Rock Me Roll Me" which sounds like it's been lifted straight off Lennon's "Double Fantasy") , but at their best (the moody acoustic numbers "Hidden Monsters" and "Like a River Flows") match the quality of their previously released material with aplomb.
So a mixed bag for sure, but more hits than misses and a very interesting listen for fans of the likes of Lazy Smoke, Hudson Ford and other Beatley powerpoppers.
Guerssen will be releasing this on vinyl in March, and on CD in April.