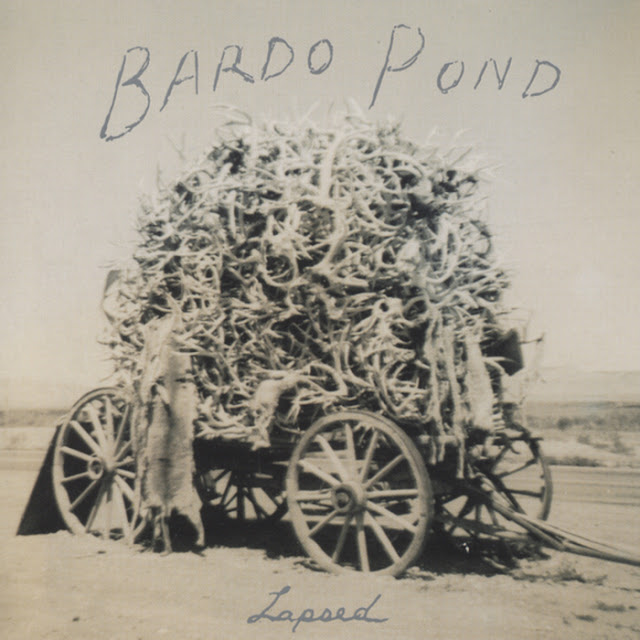 Lapsed is the third long player from Psychadelphia veterans Bardo Pond, acting as a missing link between first-wave Shoegaze guitar wrangle, and all the titanic sludge drone that would follow in it’s wake.

Lapsed finds our heroes at a crossroads, a turning point. It’s what you might call a pivotal record. It was their first for indie behemoth Matador Records, and their last working in a ‘professional studio’ (the band would proceed to build their own Lemur House studios and work the home recording ethic into their sound, as well as their songwriting.) They worked with producer/engineer Jason Cox at Cycle Sound, in Philadelphia, which doubled as a motorcycle repair shop. Some of the grit and motor oil worked it’s way into the record, like guitarist Mike Gibbons said, in an interview for the Ptolemaic Terrascope, “really good and warm, but with a hard, dirty edge to it.” Some members of the band felt that the previous record, the sprawling double-LP Amanita was “selling out”, too clean and commercial, and took dubious delight in the recording process being described as “sick”.

'Lapsed' seemed to be the point where you had pushed your instruments so far that they broke up into clouds of abstract stellar matter, back-scatter radio transmissions of pure-fuzz. In fact the record sounds like it was picked up by a radio telescope and recorded onto giant slow-moving reel to reels for later analysis and yet it‘s inherently melodic.

It’s hard to top the Terrascope, so I won’t bother trying. In response, Michael Gibbons said that “heavy distortion and density were what we were digging. Lapsed predicts futurist drone onslaughts like Fuck Buttons Tarot Sport, the melancholy infinity of Jesu, the colorful psychedelic metal of Boris. It is worth remembering, dear readers, that this record was made in 1997. It predicts the future because it helped to create it. Bardo Pond’s DNA has woven it’s way into the psychedelic genome, enormously influential, and always good, or at least interesting, yet overlooked beyond the scene.

The good folks at The Active Listener have given me some space, to sing the praises of underappreciated classics. I picked Lapsed off the top of my head, because I felt like listening to it. There isn’t much opportunity to do investigative journalism on older records, in the mainstream media, unless they’ve been re-issued or compiled, or somebody dies, so we end up with a skewed version of history, of culture, of what people are listening to. In short, there’s no room for ‘classic’ records, in these busy times. If my listening habits were entirely confined to the flavor of the week, buzzbin album du jour, I should surely vomit holy water, hang up my headphones, and move to Wyoming.

It’s this fight for attention that is the elephant in the room, in these times. Is it possible to have a favorite record anymore? I notice an increasing trend of people’s favorite record being from before the internet, with nostalgic ramblings of neighborhood record stores and sweaty cheap concerts. Invariably, the rosy hued charm of what used to be. I remember having favorite bands, of which i was a fanatical expert and enthusiast (I used to own 52 LPs by The Cure and have seen Phish live 42 times). But anything post-2000, and my mind turns into an amorphous grey blur, waterfalls of downloaded data and white noise, cascading through my waking thoughts, into my dreams. I remember every record, along the way, and the pivotal moments of discovery, the ones that marked me. My aim is to turn back the clock, tip the scales, and re-investigate some lost classics. Because I’d like to hear them, and get to know them better.

They’d have you believe that every motherfucker stringing sentences together for Pitchfork has a Ph.D. in musicology, was suckled at Joe Strummer’s hyperextended endocrine gland, but I’ll be the first to admit it: I AM NO EXPERT. I am trying to become definitive (and losing badly) and everything you read here, or anywhere, is written in the moment, after a string of sleepless nights, twisting my beard and praying for an inspired line. So I turn back the clock, like Doc Brown, and return to 2001. I was 21, living in Chicago, working at Whole Foods. One of the managers, Karl, was a fellow shoegaze rock ‘n roller, and had impeccable taste. I was finally living in the city, for real, rather than visiting on the weekends, and had gotten out of poverty and a precocious marriage, got a leather jacket and was very proud indeed. (The badness was yet to come). I came upon indie rock, on my own. With a Bardo Pond or Tortoise or Godspeed You! Black Emperor LP, I felt as if I owned a holy relic. You could practically smell the censor. I was avidly pursuing Blake’s advice, “the road of excess shall lead to the palace of wisdom”, and doing my best to eradicate all personality. These were the Shoegaze years, living in a slanty attic bedroom of a former convent, staring out the window until dusk, watching the days fade to grey, long amorphous guitar squall making me feel like I was sailing on an endless, turbulent sea.

Lapsed was one of the earliest discoveries of that period, and one that parallels my listening tastes since then, the descent into metal, noise, drone, finally everything. It sounds fresh and modern, and still utterly unique, even now. It nods it’s head to the classic psychedelia of the ‘60s (Phil from Ptolemaic Terrascope compared them to Jefferson Airplane) but filtered through the Jesus And Mary Chain’s drained fuzz pedals and wearing a sneer. This music is big and bold, passionate; not for lackluster heroin addicts. These are bonafide mystics, the Gibbons Brothers’ guitars, reaching for the heavens, with Isobel Sollenbergen acting as a very capable sorceress. ‘Tommy Gun Angel’, the album opener, would be my pick if you were to hear one track off this record, or just one song to capture the ghost of the Pond, but you’d be selling yourself short. The searing damage of ‘Flux’ is becoming a new favorite, with its low down, slowed-down EARTH like dirge, making me glad I pulled this one out for another spin. Also noteworthy is the culmination, ‘Alprin’, simple acoustic guitar, run through delay pedals, with satellites of electric guitar floating like will o’ the wisps around the margins while Isobel coos. It’s 14-minutes long, and I feel lulled and refreshed after every listen. It’s got everything that was good about classic adventurous Pink Floyd, which is reason enough to bring it to the attention of this blog’s readers.

Overall, this album has a cleansing, rejuvenating effect. The act itself can be a harrowing experience, as the tumult of ‘Tommy Gun Angel’ consumes your world like Galactus, and most of the fare on here features a dense, hot wall of guitar white noise. Apparently listening to noise music releases chemicals in your brain that makes you feel at ease. You get used to it. It’s not all skree, however, BP have always had an element of blues shuffle boogie to their sound, here manifested as ‘Pick My Brain’, which sounds like ‘Seamus’ by The Floyd, with a soaring electric guitar playing the part of a baying dog, or an experimental b-side from The Black Rebel Motorcycle Club’s Howl. There’s a little something for every psych lover on here (unless maybe you're one of those Canned Heat throwbacks).

Writing about an old record, especially on the internet, seems to fulfill one of two functions.

1. To advise people to hear the record themselves.
2. To attempt to describe sounds, perhaps out of some nerdly compulsion.

Consider this review a combination of the aforementioned motivations. You NEED to hear this record, if you love shoegaze noise music old rock ‘n roll nodding your head to a pulse like a beating heart swimming in a glassy ocean undisturbed by ripples or waves floating in stars like eternity expanding to become the whole cosmos. If you HAVE heard this record, consider yourself reminded: Bardo Pond are awesome, worthy of your adoration. Worthy of your precious time. For me, this is merely another battle against musical ADD and the continual degradation of our culture into soundbytes and disposable tunes.