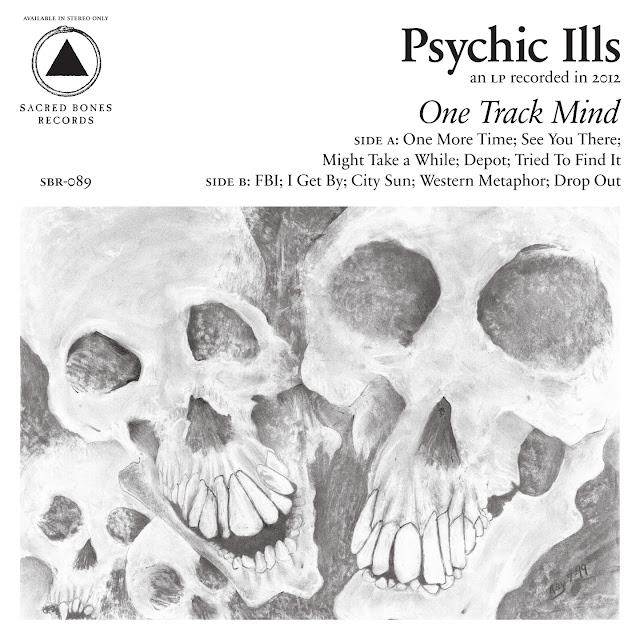 "One Track Mind", released in February by Sacred Bones Records, is the fourth full- length release from Brooklyn psychedelic stalwarts Psychic Ills. It’s the second LP to reflect the sharp transition in the band’s approach to composition and record-making that we first heard embodied on 2011’s "Hazed Dream" LP.
Before "Dream", the band tended to source their songs from collective explorations and improvisations, “the whole band jamming and kind of pulling things out of that” as bassist Elizabeth Hart put it in Interview magazine. These methods, as one might expect, often yielded lengthy tracks, with several 8 to 12 minute opuses distributed across Psychic Ills’ first two full-lengths and the 2010 EP "Catoptric".
At some point after their third LP, "Mirror Eye", much of which was improvised in the studio, the band felt that they had taken this approach “as far as we could take it,” Hart said, “and wanted to try writing music in a way that was more unfamiliar to us, actually writing a song and not some kind of improvised approach.” With "Hazed Dream" then, a new modus operandi had been set into play, one in which guitarist/vocalist/multi- instrumentalist Tres Warren brought material written in advance to the rest of the band. (By this point the lineup had become the present trio of Hart, Warren, and drummer Brian Tamborello.) Hence the more conventional verse-chorus songcraft and more compact offerings of the last two LPs, both of which still retain a hypnotic, drone-underground atmosphere and manifestly psychedelic ornamentation.
Fans who were able to turn this corner with Psychic Ills to embrace "Hazed Dream", or who first connected with the band by way of that album, will likely also be pleased with "One Track Mind", which covers similar territory and upholds the previous record’s level of quality. "One Track Mind" represents a modest further step towards accessibility for the band, offering slightly sharper contrasts between tracks, with a few
songs a bit more uptempo than anything on the earlier album. The sound of the current LP is cleaner and crisper than that of its predecessor, with the vocal more forward in the mix and somewhat drier, though plenty of reverb remains. Each component of the drum kit is heard clearly and distinctly, whereas the kit on "Hazed Dream" stood further back with a somewhat muted sound.
Some of the press for "One Track Mind" has given the impression that Neil Michael Hegarty of Royal Trux and Howling Hex fame produced or at least co-produced this record. The sleeve credits, however, clearly limit Hegarty’s contribution to two tracks, both of which he mixed in Colorado while providing backing vocals on one (“Might Take a While”) and guitar on the other (“I Get By”). The rest of the songs were mixed in Brooklyn by Charles Burst, who has been working with the band since at least as far back as 2006 and who also provided vocal and instrumental contributions on the present release. In the absence of any specific “production” or “producer” citation on the sleeve, credit for the overall sound and approach of "One Track Mind" defaults to the band itself. Two aspects of the record’s overall character quickly struck me. One was the album’s smattering of country music accoutrements and devices: twangy lead guitar licks—even a little twang here and there in the vocals—acoustic guitar, slide guitar, harmonica, and bass lines occasionally toggling over fourth and fifth intervals. This rustic décor fed a more subjective impression, that of an unmistakable desert aura—a dusty, haunted evocation of the American Southwest. For the first few listens, the songs sounded to me like the musings of a fractured posse of alternate weird America hipster cowboys using laudanum to come down from peyote while kicking desultorily around an Old West ghost town.
To be sure, the music is spare and open in construction, a quality that along with a haze of reverb might help to evoke outspread desert expanses. Maybe the vibe in question is aided and abetted by the album art: the skulls on the cover, and an inky abstract on the inner sleeve that combines grays and browns with floral colors in a manner that could be taken as depicting a desert in bloom. (It’s worth noting that the artist from whose body of work these pieces were selected, Powell St. John, wrote songs for the 13th Floor Elevators back in the day!)
But these factors didn’t seem like enough to create an Old West impression quite as strong as what I was experiencing. Furthermore, my exploration of the lyrics yielded no concretely corroborative references except the title of the album’s instrumental penultimate track, “Western Metaphor,” the meaning of which seemed much more probably in line with that of “western civilization” than “spaghetti western.” I was relieved to find that it wasn’t all “just me” when I ran across a Pitchfork writer’s characterization of the album as “offering 10 tracks that all sound as if they were found along the same stretch of desert highway.”
With repeated listenings my awareness of the album’s limited country music appropriations and my sense of dusky psych-western ambience rapidly diminished to leave me with a fine sequence of often brooding, shadowy songs cast in Psychic Ills’ own voicing of contemporary drone-psychedelic rock idiom.
On both "Hazed Dream" and "One Track Mind" I have found the prevailing mood to be somewhat more narcotic than psychedelic, the spare construction, restrained pace, and at times almost muted delivery more resonant with the pruned-back affect and liquid slowness of an opioid trance than the complex effulgence of psychedelicized awareness. Or perhaps the psychoactive agent most truly implicated here is just good old weed—a nocturnal, contemplative indica rather than a sunny, bubbly sativa.

The aforementioned Pitchfork writer found this album “dull.” I can’t concur. It’s true that this music moves slowly—more warily (like Side B’s opener “FBI”) than lethargically—its briskest passages hitting middling tempos at best. It’s also true that this music doesn’t try to rivet your interest with abrupt changes, razor-sharp contrasts, emotionally saturated vocals, or other devices conventionally used to pack pizzazz into music. Rather "One Track Mind", like "Hazed Dream", compels interest with a more downtempo brand of bewitchment, conjuring a mesmeric and distinctively Psychic Ills mindspace and patiently transporting the listener through a series of the arid expanses, dusty attics, murky basements, and portentously empty twilit rooms contained therein like an excursion in dark picaresque cinema.
It all works well for me. In the course of writing these comments, I listened to the record from start to finish many times through, giving it all of my attention. At no point did this effort become a chore; the band worked its signature entrancement on me every time. Meanwhile, hooks from the album, like the lead guitar lick that starts off “One More Time,” the album’s opener, and the chorus to “Might Take Awhile,” the third track, began to lodge themselves in my head—a sure measure that Psychic Ills had done something right.
The album’s title phrase comes from the fifth track, “Tried to Find It”, which laments the destructive effects of obsession on relationships: “I’ve got a one track mind/ There’s some things that I shouldn’t have said/I made some friends and I lost some/ Tryin’ to clear my troubled head.” The option of escape—“But it’s easy to just walk on/ Do what I know how to do”—is raised and rejected in favor of a more hopeful course: “I’ll take it easy on you/If you take it easy, easy on me/Easy is the way to make things be.”
Departure, movement and travel, often seemingly for their own sake, emerge thematically across the album. The second track, “See You There,” offers the promise “If you’re goin’ back down the road, I’ll see you there…We can go anywhere we want to go.” The fourth cut, “Depot,” voices a traveler’s wariness: “If I see you at the station/ If I see you by the side of the road… If I see you at the depot/Like a breeze tryin’ to blow outta town…You know I’m not stickin’ around.”
In another variation on this theme, the narrator of “Drop Out,” the tenth and final track, declares “I’m gonna leave/I’m gonna get up and go/Find myself a way out of here.” The subsequent lines, “I’m gonna drop out…Find myself a new way to live/Find my mind a place where my thoughts are clear” hint at an understanding that dropping out—escaping societal madness and constraint—is as much a matter of changing consciousness as of going away somewhere.
Everywhere on "One Track Mind" the method is minimal and restrained. The music is spare and open, built of a small number of relatively simple parts. These components hang bare in an uncluttered sonic space where no shortcomings in ideation or execution get to hide themselves in a density of layers. A tempered distribution of trippy ornamentation and an almost constant gossamer of reverb suffice to maintain the album’s sense of psychoactive strangeness in lieu of a profusion of sonic embellishments.
Such a bare, unadorned approach, leaving almost every component of the sound so openly exposed, strikes me as an honest and courageous way of making music, especially given that the members of Psychic Ills aren’t highly polished, technically adept musicians, but to the contrary bring relatively basic chops to the table. Nowhere does the Ills’ pared-back honesty betray or embarrass them. The tempo of “Western Metaphor,” for instance, drifts in a way that sounds unintended. Rather than interpreting this unplanned event as a “mistake” to be “corrected”, Psychic Ills take the braver course and choose to press the music as it was played. The resultant passage is slightly unsettling, making the track more interesting than it might have been otherwise and supporting its strangeness of atmosphere.
Song highlights include “Might Take a While”, which, despite countryish qualities, has something of a Velvet Underground feel—always a happy allusion in my book. Hegarty’s spot-on backing vocals grace the chorus with added strength and punch in one of the record’s choicest strokes. The next track, “Depot,” endeared itself to me by recalling vintage heavy psych with a relentlessly simmering grind of a guitar riff and ominous organ rising slightly higher in the mix than on other cuts.
My favorite track, “City Sun,” offers the record’s most purely upbeat mood. This happy ode praises and feminizes the orb that warms and brightens the city with phrases that could come from a love song: “She’s all right you know she’s just fine with me…Everything’s fine when she’s keepin’ my mind at ease.” Despite the song title’s urban reference, this piece is texturally the album’s most rustic, its basic arrangement built of vocal, acoustic guitar, harmonica, and shaker, augmented only by a few late touches of organ and a brief, light thread of electric guitar at the very end.
Choice sonic touches sprinkling the album include the amusingly disorienting tape speed effects that open “Western Metaphor”; the high, chiming wah guitar that Hegarty weaves into “I Get By”; and all of Warren’s occasional organ and piano contributions. Warren’s shrewdly understated lead guitar licks are a consistent pleasure throughout the disc, with highlights provided by the slide guitar on “See You There”; the backwards guitar that subtly accents “Tried to Find It” while snaking prominently through the next track, “FBI” (a cut which also benefits from Charles Burst’s laconic bongo punctuation); and the plaintive, otherworldly lead guitar of “Western Metaphor.”
"One Track Mind" leaves me reaching to delve more deeply into the band’s back catalogue while looking forward to whatever they’re going to do next. 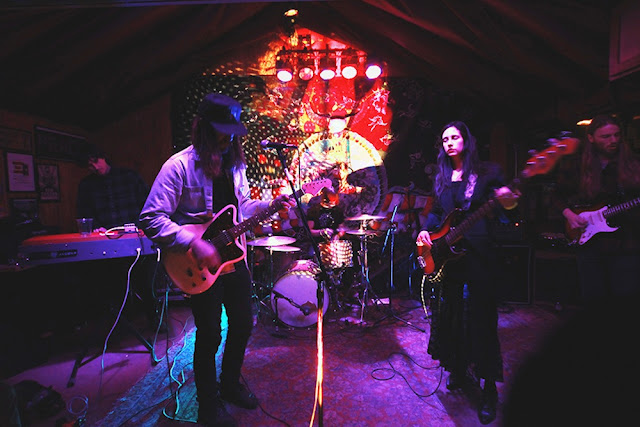