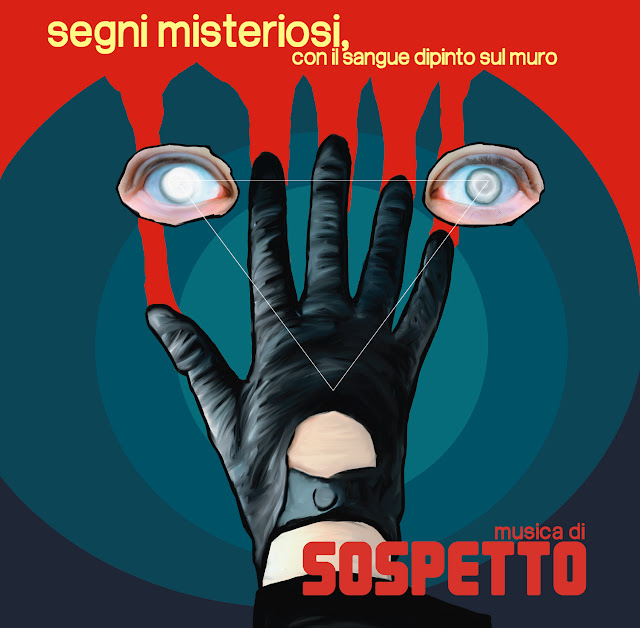 The Italian Giallo scene of the late sixties and early seventies is best remembered for it's groundbreaking assault on the senses - particularly the eyecatching visuals of directors like Dario Argento, but also for the envelope-pushing soundtrack work provided by the likes of Ennio Morricone, Bruno Nicolai and most famously, Goblin. These soundtracks essentially rewrote the book on how film music could be approached, integrating woozy psychedelia into the mix and upping the tension of Bernard Herrmann's "Psycho" strings to unbearable levels that often had as much to do with the film's success as the directors.
German duo Sospetto have taken their love for the genre a step further than most and crafted a soundtrack for a non-existent film (the title translates as "Mysterious Signs, Painted With Blood On The Wall"), which pays homage to the style of these soundtracks without resorting to pastiche or plagiarism at any point.
Opener "Canto del cigno" sets the pre-credits mood nicely with a beautiful, unsettling vocal and piano melody that hearkens back to Fabio Frizzi's Fulci films, before "Uccelare" ups the tempo with jazzy drums, and dramatic Goblinesque Hammond organs.
Unusually for this sort of work there's very little repetition, so while there are several pieces that you could safely assume could fulfill the role of a main theme, they're revisited very rarely with the duo of Christian Rzechak & Hobo Jeans instead opting to explore new territory covering everything from atonal, psychedelic mood pieces to high drama Polizei cop chase territory with blaring brass and funky wah-wah guitars.
As with the best of Morricone's Giallo work, these two never leave you guessing how you're supposed to be feeling in any given scene, with masterfully observed and carefully manipulated atmospheres creating a creeping sense of palpable unease so effectively that the odd breaks into Bossa Nova and Polizei style funk offer a welcome respite, and a chance to regather one's wits before being plunged headfirst into further abstract terrors.
Another winner from Cineploit, who along with the Death Waltz Recording Company are quietly cornering the market in sinister soundtrack tuneage.