A bucket list gig for me here, and one that didn't disappoint.
Opening act, The Drones did a reasonable job of grace under pressure, even with an appalling mix that turned the guitars and vocals into a wall of trebly mud - not to mention a crowd that made it clear that they didn't want anyone but Neil on stage. 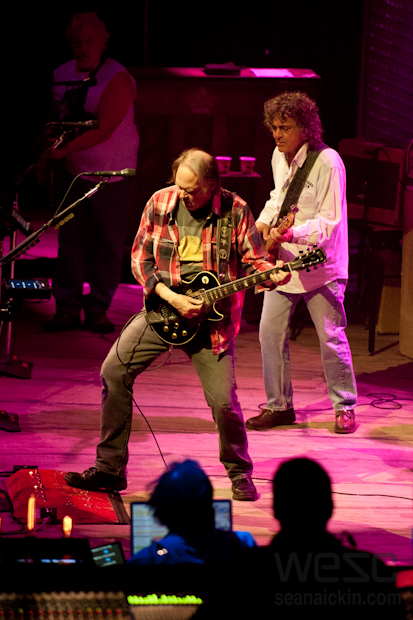 Easy to see why too, once Neil and the horse lumbered on for a two and a half hour set that much like the recent "Psychedelic Pill" album, emphasized heavy jams with lengthy guitar solos.
Key to the show's success was an expertly balanced set list that included enough old favourites to keep the casual fans happy, and choice selections from "Psychedelic Pill", which in this context carry all the weight of his best known material - "Ramada Inn" in particular may be the best song he's written in the last thirty years, with a devastating chorus and some exquisitely subtle and emotive guitar wrangling.
Neil was in fine form, personably and musically and was never short of a joke with the crowd, or with fellow Crazy Horse guitarist Frank 'Pancho' Sampedro.
A mini acoustic set offered a brief respite from the guitar histrionics, with an excellent solo version of "Twisted Road", sounding more direct and sincere than it's clunky studio counterpart, and a crowd pleasing "Heart of Gold" showcasing some fabulous harmonica work.
There were a couple of new songs in the setlist too - not bad for someone who had to write an autobiography because they had writer's block. "Hole in the Sky" sounds like a luke warm "Are You Passionate?" outtake, but "Singer Without a Song" is much better; an emotive piano ballad with sensitive vocal accompaniment from Billy Talbot.
Things got loud again pretty quick with a quickfire selection of classics; "Cinnamon Girl", an inspired "Like A Hurricane", "Sedan Delivery" and "Hey Hey, My My (Into The Black)" amping the band and the crowd to a fever pitch, before pulling out the old Reactor chestnut "Opera Star" for an encore and finishing with a hilarious, shambolic new arrangement of "F*!#in' Up" that the band haven't quite worked out how to finish yet.
Definitely the best night out I've had watching a bunch of old men making a racket in what may as well be an aircraft hanger - inspired. 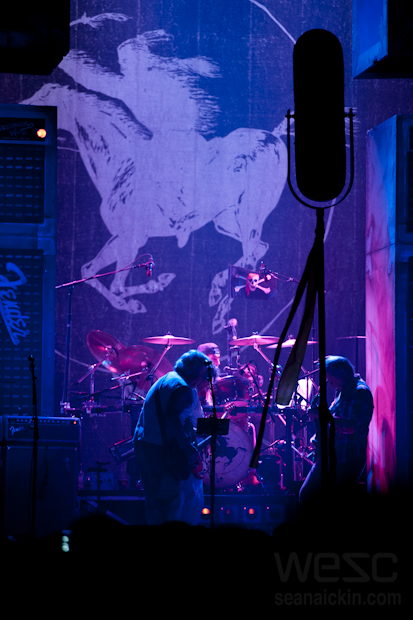