DJ Kirk Degiorgio and Mark Melton's label Sound Obsession have just done library music enthusiasts a massive service, and reissued French composer Bernard Fèvre's trilogy of essential library albums from 1975-1977 on vinyl. Compared to other industry composers, Fèvre was far from prolific in this particular genre, but his three lone production albums show that he favoured quality over quantity.

Long sought after by collectors, these reissues will be snapped up by a hungry public. The first thing one notices is the conciseness of Fèvre's material. It would be unusual for production music of this sort to be used in a concentrated burst of more than a few minutes, so Fèvre restricts his compositions to this length, making these albums completely free of filler, partly because tunes don't stick around long enough to outstay their welcome, but mostly because their brevity allows Fèvre to concentrate his efforts into instantly memorable themes and then move on to the next number before the listener has had the chance to catch their breath. 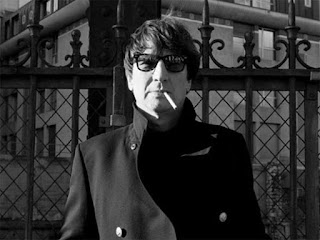 1975's "Suspense" is a pretty self explanatory release, although the majority of its contents sound like they're geared towards espionage and crime thrillers, rather than the supernatural, so Hauntologists may not get as much out of this one as they were anticipating. Analogue drum machines, vintage synths and plenty of funky clavinet are the order of the day here, created an air of tension that remains unspoiled throughout. I found myself involuntarily tiptoeing around the house while it was on.

"The Strange World of Bernard Fèvre" (also from 1975) is a more diverse affair. still focusing on vintage synthesizer and drum machine combos, it offers a more balanced view of Fevre's compositional skills, with a number of themes that transcend the cult appeal of library music, which one can easily imagine becoming part of mainstream consciousness, had they been exposed to the mainstream in some sort of well known TV serial. And to these ears, the suspense cues on here are sharper, and generally a step up from those on his previous release.

Which leaves us with 1977's "Cosmos 2043", which is the best of the lot I reckon. With "Star Wars" doing big business at the box office, Sci-Fi was THE big deal, and everyone was jumping on the bandwagon, including Musax (the album's original label) who were quite happy to plaster a golden droid on the cover. Fèvre's a class act though, and this isn't some schlocky cash-in, but an extremely memorable space-synth album with moments that are pure kosmische, and others that sound like they're straight out of a seventies science documentary (which they were more than likely used for). Ghost Box acolytes will absolutely adore the vast sound vistas on offer here - I'd be very surprised if The Advisory Circle's Jon Brooks isn't intimately familiar with this.

If you're only going to grab the one, "Cosmos 2043" is your man, but you'd be well served to grab all three while you can. There's plenty here to reward repeated plays. Fèvre meanwhile, would find his greatest cult appreciation with his next project "Black Devil Disco Club", but for me these three releases are the man at his best.