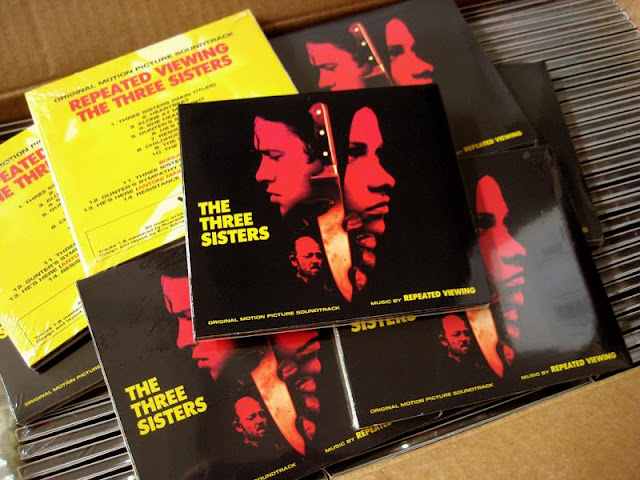 Glasgow’s Repeated Viewing – musician Alan Sinclair – has made a name for himself since 2011 with several independent horror and thriller soundtracks, especially the type whose films’ posters are adorned with all the portent symbolism and a healthy dash of camp, recalling the best 70s and 80s cult classics. This June Wil-Ru Records conjures up Repeated Viewing’s work for Dáire McNab’s latest, a neo giallo film: “The Three Sisters.” This one’s for a cinephile’s soiree, where a bevy of names – Argento, Bava and Fulci – are more indicative than any other credentials and the searing synth and guitar music of those same directors’ films seeps and crackles (though not necessarily on vinyl) from a point in the room. For wayward listeners too, “The Three Sisters” soundtrack is a great listen: the taut rhythms, rich synth leads, and huge guitar sounds all evoke a creepiness that recalls the hey-day of the genre itself.

Like its predecessors, “The Three Sisters” soundtrack plays with boundaries, often juxtaposing two sides, exploring both atmosphere and rigid instrumentation. Many soundtracks – especially in this particular genre – do this: blending gritty urban noise with the bucolic (and unnerving) emptiness. So, Repeated Viewing has tapped into this familiar dualism, using a varied score to delve into the tension that makes these films so enjoyable to watch.

The brooding “Three Sisters Main Titles” shuffles from bells to eerie synth easily – and just as easily from distorted guitar leads to nervous arpeggios and a minimalist bridge. All in all, it sets the soundtrack far above most, proving itself an entity beyond its connection to the film. By the time “Heartbeat” begins – simple piano composition and ghostly vocals – the spookiness factor shoots skyward. Album highlight, “The Escape,” comes in just over seven minutes and recalls the minimalist compositions of Kraftwerk, using a clean melody that shifts throughout and tight drums samples that build to its frantic conclusion.

If you’ve seen the recent flicks "It Follows" or "Starry Eyes" – and more importantly listened to their soundtracks – this one’s right up your alley.

Wil-Ru Records releases “The Three Sisters” on CD and digitally on June 9th with great art work from Eric Lee. Along with the original ten scores, the album includes remixes by Vercetti Technicolor, Antoni Maiovvi, Umberto and Night Sequels. You can pre-order the digital version below, and download a free three track sampler of the soundtrack here.