Sabbatis "Warning in the Sky" 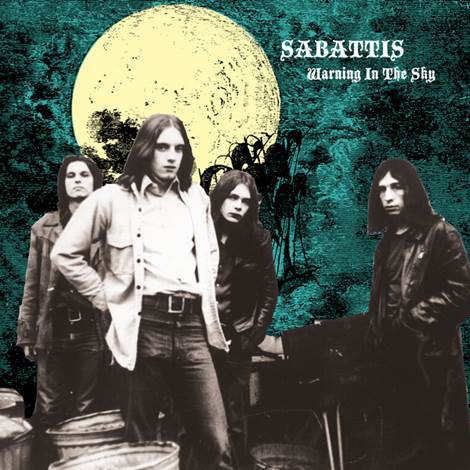 Guerssen label imprint Out-sider has a new entry in their excellent catalog of lost classics and rare material from the best quality sources. Sabbatis’s “Warning in the Sky” is an unreleased (until 2011!) 1970 hard rock slab featuring a foreboding name. One may immediately draw comparisons to Black Sabbath, but it's actually less Sabbath-y than a lot of records in this vein. The band was formed in New York in 1968; I'm always excited to see amazing groups that I have not heard from this era. Out-sider is giving these lost treasures the right treatment, from top notch cover design and liners to pristine remastered sound. Let’s see what the band had to offer in the brief period that they were active.

To start, this band's forte is primarily instrumental, and these songs are built upon swinging roadhouse riffs (Gibson SG3 triple-hum bucker and Marshall double-stack) accompanied by quick, tight, Euro-prog riffs. The band couldn't wait to get through the verses to jam the songs out, and I’m sure these guys were great live. The focus is mainly on instrumental excursions, which this album delivers in spades if you are a fan of old-school riff rock. There's a strong British progressive touch as well as a minor-key gothic vibe that does their name justice. The bluesy vocals remind me particularly of Mike Pinera (Blues Image/Iron Butterfly).

"Everyday Is Cool" has that familiar upbeat 70s vibe, and strangely I hear catchiness along the same lines as “Feels Like The First Time” by Foreigner in the main riff (more on that connection later!) "Crystal Mirror" also has with a classic roadhouse bluesy riff which just reeks mojo. "GREEN GLASS AND ALL THAT JAZZ" has some excellent lead playing and tone, and an 'open-road cruising-in-the-Barracuda' feel. There's also a darker side to it all, and the mournful "The Devil’s In You" starts off once again with drums in full ride cymbal/ jazzy snare top gear mode, with an infectious riff and some nice minor key soloing. Side two features the more acoustic/folkie stuff, and "Conversation with Billy" does a nice job of showing the group's softer side. There’s all sorts of interesting changes, with professional musicianship which make this much more than a drugged-out hazy jam, like Phafner or the Estes Brothers.

All of the songs on the album were recorded in 1970 in a home studio in hopes of landing a record contract. They would lay unreleased until 2011 when a copy of the 1/4 reel turned up. As I've not heard the 2011 initial release of this CD, I can only judge from Outsider's excellent remastering job that this is a quite professional sounding production, which is no surprise as the band gathered funds to get their friend Nathan "Mick" Guzauski who is now a multi-platinum Mixing Engineer and Sound Engineer. He did pickup engineering work with a few now-well-known musicians early on in his career, including Lou Gramm, later of Foreigner (remember how I mentioned them earlier? There are no coincidences). It’s no surprise that there was an ace behind the boards for this. It sounds better than lot of private press/obscure hard rock albums in terms of fidelity at least, making it a good choice for people wary about needle drops, bad EQ or noise reduction.

I suggest this for fans of Leaf Hound, Grand Funk, Mountain, and fans of Mike Pinera's stints in Blues Image and Iron Butterfly. Also, Hammond B-3 fanatics who like extended improvisations featuring the instrument will find a real gem, as it offers up some low-mid gritty tones ala Jon Lord or Mystic Siva. There are no hardcore revelations here, but "Warning in the Sky" shows a super tight band with the right image poised for a breakthrough. Sabbatis had a lot of strong suits and were excellent musicians, and it's a shame this tape didn't wind them up in the record bins….until now, where it will get the exposure it deserves.