Nick Grey And The Random Orchestra "Breaker of Ships" 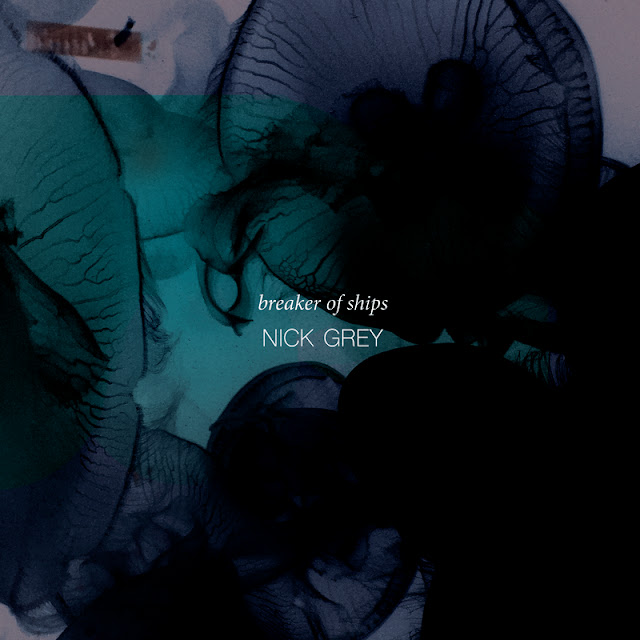 Berlin based chaunter Nick Grey is a name that may well be known to many readers, from his work with 48 Cameras, his superb releases with The Random Orchestra (see last year's incredible ‘You’re Mine again’', reviewed here at The Active Listener) and his solo work, not least ‘Thieves Among Thorns’ which this listener counts amongst his all-time favourite albums. One of the most inventive and truly heartbreaking musicians at work today it is almost impossible to find reasonable comparison but as a reference for intrigued or curious uninitiated think Scott Walker meets Coil meets Robert Wyatt. And yet also so much more; think of a reference point and Grey will already have moved on in his search for the perfect midnight song.

‘Breaker Of Ships' takes a different path from the romantic, glam inflected electronic anthems of 'You’re Mine Again' into sometimes colder, electronic territory but still with the tangible heartbreak and tension that Grey is a master of. This aspect is clearly present as is the melancholic candlelit baroque tapestry that often adorns his work. The title track opens the album, electronic beats and cello merging with ominous string sweeps to create an atmosphere of late night existential dread and poignant reflection. Grey's vocals evoke both Scott Walker and Berlin period Bowie, swathes of treated guitar crashing around his words before calm returns as Grey intones 'there's a blackness hanging low among us'. The mood turns to hope as the singer proclaims his exit, his leaving from whatever painful place he was caught in. The track shifts again (it is an epic 11 minutes long) into analogue soundwaves, organ and chiming guitar notes with Grey’s falsetto reminding this listener of some of the most beautiful and otherworldly moments of Sigur Ros. This is music for the liminal times; the dusk or the dawn. A chorus of guitars approaches and grows, ratcheting the intensity up and taking the song in yet another emotive pathway. So far, so heartrending, uplifting and eerie, all within the very first track.

'Of Ghosts And Women' is an electronic symphony, swathes of strings and arpeggios framing Grey's Brel-like performance of post break up bitterness, melancholy and grace dripping off every chiming guitar note and analogue bleep and whirr. Haunted and yet dignified, the music steps into the hinterlands of classic synth pop and the spectral nightlands of ‘Music To Play In The Dark’ Coil and the output of the Ghost Box label. Next, ‘The Archivist' switches pace into a doomed guitar and violin lament that recalls Grey's earlier nocturnal EP 'The Candlelit Eyes', the protagonist observing human life and lovers dispassionately and coldly as they go about their various tragedies. A tense and ringing vintage synth echoes like a warning siren as Grey adds drama and a twisted narrative; this is a mini electronica opera. 'Vanisher' maintains the acoustic, late night feel, organ sounding a lonely motif as Grey is 'waiting for the end, down in my bunker'. Utterly evocative and with a touch of Floyd in the Gilmour-esque guitars, this is essential for any lovers of the afore mentioned Scott Walker, John Foxx, latter day Ulver, Tiger Lilies and perhaps Nick Cave. There is often a dark cabaret feel to this album, candles flickering on tables amongst an audience of the broken hearted and lonely.

'Juliet Of The Spirits' is a thing of beauty, insistent guitar merging with the echoing drone of a singing bowl and a slow snare beat; there are ghosts in this music, the wraith like choir that sings throughout adding a genuine sense of sadness and longing. Bass propels the follow up 'Juliet Of The Bones' into almost King Crimson prog territory (which is a good thing in my book), ragged and ferocious guitar duelling with clarinet in a truly thrilling piece of experimental noise. Then, the Juliet of the previous song returns, the quiet and stately guitar line and hushed drums introducing Grey's return. Grey's vocals deserve special mention; he is living these songs, his performance nuanced, heartbreaking and emotive. Gradually Juliet disappears in a fog of white noise as the song draws to a close, the distant sound of an echoing male voice shrouded in the mist. Final track proper 'Ghost Rain' takes a spoken word sample from Peter Wollen, recounting the plight of animals suffering at the hands of humans and with a plea to see their pain as no different than our own. This is framed beautifully by symphonic strings and the sound of rain.

One is almost left breathless after hearing this album; it feels like witnessing an epic storyline from beginning to end, there is a sense of having been a part of or an audience to something very special indeed. Or, quite simply, of hearing a true artist at the peak of his song writing and performing powers. And there is more. The bonus track is a mix of Nick Grey and 48 Cameras 'Here He Comes Now' by electronic artist Scanner (last seen performing an electronic tribute to Joy Division live with a full orchestra). It fits perfectly with the mood of the album overall, dark, almost noir-ish and with a hint of dread and danger.

If you haven't yet experienced Nick Grey then any album is a useful starting point as they are all highly recommended and have their own trove of dark, hidden jewels. However, 'Breaker Of Ships' is as near perfect an album as you will hear and I would urge you to seek this out.