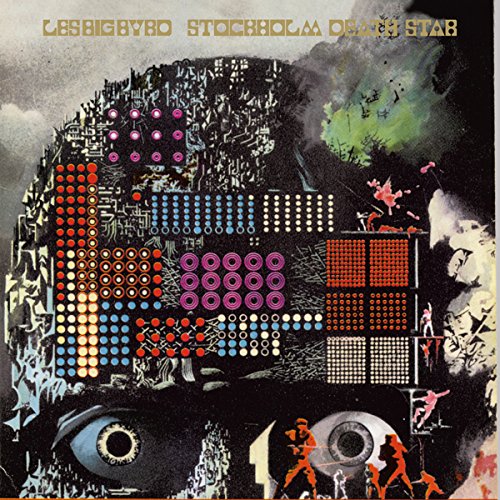 Stockholm’s Les Big Byrd has appeared more and more in my internet reading destinations, and, if you’re reading this, they have likely been appearing more frequently in yours too. It seems they’ve got a new release of some sort every few months – all the better for fans of their fast paced, mad synth space rock. This time it’s “Stockholm Death Star” – a four song EP – put forth by Brian Jonestown Massacre’s Anton Newcombe’s A Recordings (editor's note - as if to demonstrate just how prolific they are, there's since been a further LBB release, a 12" picture disc). If you’re familiar with “They Worshiped Cats,” the band’s 2014 debut full length, this one follows partially in its footsteps and partially veers off, allowing for paced structuring and a few more traditional hooks than the former.

Opener, “Stockholm Death Star,” is a tight, instrumental, motorik endeavor. It’s full of weird flourishes that seep into the pounding riff that underpins it all. It’s the sound we’ve come to expect from Les Big Byrd but somehow bigger than their last effort.

Up next, “I Woke Up in a Dream,” while still utilizing the steady beats and bass, channels a more laid back feel, something much more like dream pop than the preceding track. The slow delivery of vocals elevates the spacey interludes toward something very much like a pop song; it’s catchy, too, in different way than anything we’ve heard from them before. Only “Vi Borde Prata Men Det Är För Sent” from their debut hinted at this type of sound.

“Vapour R.I.P.” slows the whole thing down and polishes the record nicely. While still showcasing those reverb drenched guitars, washes of synth and electronic flourishes, the closing track is something like a ballad, complete with the pre-chorus builds. “They Worshiped Cats” had nothing quite like this.

If it’s to be believed, the band met Newcombe in a record shop and got talking, which eventually led them to Newcombe’s studios. One can only hope that was the case. Either way, if “They Worshiped Cats” didn’t convince you, “Stockholm Death Star” will. We’re dealing with a prodigious, versatile crew.

Available on vinyl here (UK/EU), and here (US).