Twice Dead "I'll Love You Till You're Dead Again" 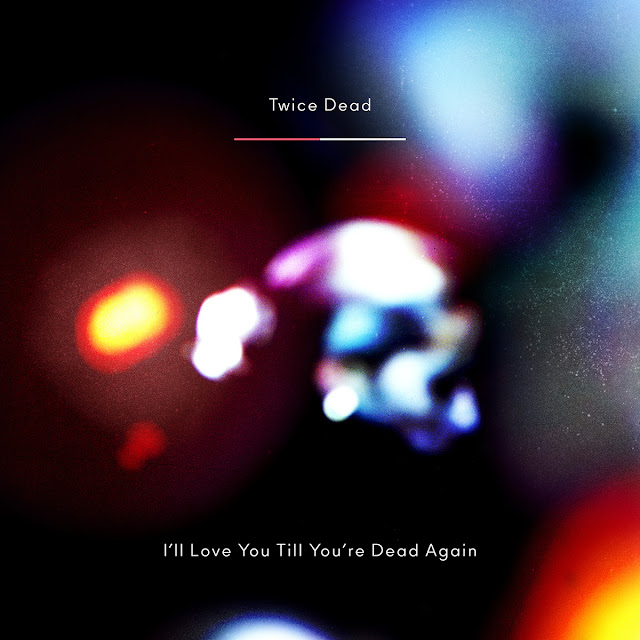 The Isle Of Man's Twice Dead have recently unloaded their latest opus onto the world wide web, press play and it goes off like an exhilarating psych noise electronic bomb. Featuring lead vocalist Mike Seed (who also records as Sand Fingers) on saxophone and words, Richard Quirk on modular synths and guitars, Martyn Thomas on drums and Neil Whitehead on bass, this is a maelstrom of Hawkwind meets Sonic Youth intent and carefully controlled melodic cacophony.

Opener 'Slip Your Moorings' begins with a howl of electrics and distorted bass, Seed's flanged and reverberated vocals drifting eerily over the quickening pace and building rhythm of the song. A mixture of The Fall's steady beat, Earth's monolithic riffage and Silver Apple's wired electronic soundscapes this is a truly massive and immersive experience. 'Petronius' follows immediately on, spoken word vocals emerging from the rippling and divebombing guitar bursts recalling the Wire of '154' (always a good thing in this listener's book). An epic nine minutes long this is a genuinely thrilling, hairs on the back of your neck cosmic electronic jam. Tightly controlled but endlessly inventive the sound becomes almost trance like as wave upon wave of guitar and vintage synth roar forwards. 'The Shadow Narrative' emerges from the previous track, jagged synth pulsating and delivering a riff that 'Hall Of The Mountain Grill' era Hawkwind would be proud of. Free form and exploratory (although always within the tightly held beat) the song propels ever onwards until it fades into a humming drone and Seed's distinctive, dispassionate spoken word vocals, a chilling end to the lysergic electronic jam that came before. 'The Star Of India' has some of the most apocalyptic guitar playing you will ever hear, the distorted Big Black style bass growling beneath modular whooshes and wails and Seed's voice. Experimental, distinctly English and electrifying; Twice Dead are a hidden treasure indeed.

'Provincial Station (Goodbye Madame B)' slows the pace down with a creeping bassline and saxophone and keyboard feedback; a haunted prowl through some darkened recess of the mind. The synth modules bubble into life as the guitar lays a backdrop of dread and tension for Seed's narration. Think Throbbing Gristle, the afore mentioned Wire and Hawkwind and perhaps also Om or Sleep; but also be aware that Twice Dead are their own unique proposition who ultimately sound quite like nothing else on this earth. A case in point is 'Tide Tables'; with its sparkling synth and Seed's urgent delivery it is utterly entrancing and genuinely beautiful, the electronics creating and ebb and flow not unlike a vast electric ocean. It is arguably the stand out track on an already deeply impressive album. Closer 'Arthur's Wain' is another eccentric English tale told over a strolling bassline, swathes of distortion and a building urgent beat. If the Velvet Underground had come from the Isle Of Man then 'White Light White Heat' might have sounded like this.

It is truly pleasing that, in the age of safe and predictable major label releases and empty and depressing TV talent shows that out of the darkness comes music like that of Twice Dead. Pushing boundaries, following their own unique path and making music that burns with life, energy and creativity they demand to be heard.

Available as a free / name your own price download here: