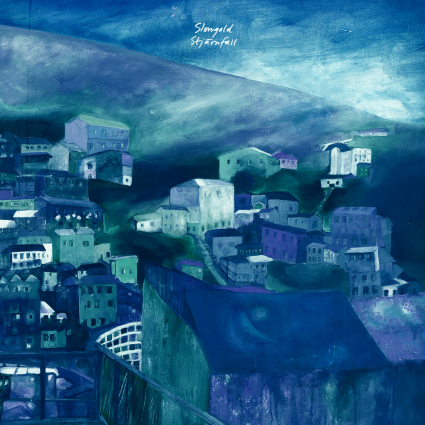 On Slowgold's second album "Stjärnfall", it's as if their sacred altar of musical improvisation is a romp down by the river with "Cortez the Killer". I'm reminded of the nonsensical front cover of Neil Young & Crazy Horse's 1975 album, "Zuma" by the fact that, for me, this is a foreign language album; I'm left with the musical content and tonalities of Amanda Werne's voice to enjoy, which is kind of nice. Werne has a beautiful, trancelike voice, which doesn't come close to sounding like Neil, even if its instrumental accompaniments belie more than a slight hint. Think of Robin Trower’s devotion to Jimi Hendrix and how he subsequently filtered it through his own playing, and you may understand what I mean.

Things start off really smoked-out slow. It's "Danger Bird" territory with some Dallas Taylor drumming style shuffles. Minimalist, well chosen riffs that are definite homages to Neil Young & Old Black, his Gibson Les Paul Frankenstein guitar. If you ever thought Neil Young never did it better than songs like "Down By The River", "Danger Bird" & "Cortez the Killer", this is the album for you.

There are also late 60s Topanga lids-n-luudes instrumental adventures, big fuzzy Les Paul tones, and a Garcia/Young/Krieger influence on the tone and solos, with occasional Doorsy keys. I was reminded a bit of a few of my favorite Michigan based, organ-driven psych bands like SRC and Mystic Siva, with definite hints of David Crosby's first solo album.

The influence of Werne’s nationality comes through a bit as well, creating a cold-yet-warm vibe. This seems to be more like a lost in time album from 1972 or so, and sounds fresh and inviting, unlike what was happening to some musicians of the time who were heading downhill on various chemical and alcohol stimuli. This is a sound reminiscent of a folk-rock style which musicians perfected by 1972.

I always admire a stab at the old school West Coast psychedelic scene, which is where my tastes reside, although as I move along I find I hear this touching on a lot of other stuff too. Being from this day and age it’s a surprise to hear the authenticity and devotion these musicians conjure. Take a listen if you like Buddha induced slow guitar jams, fuzz, keys, and sweet female vocals.

Available digitally here (US), or here (UK/EU).  Buy the LP, or stream below.