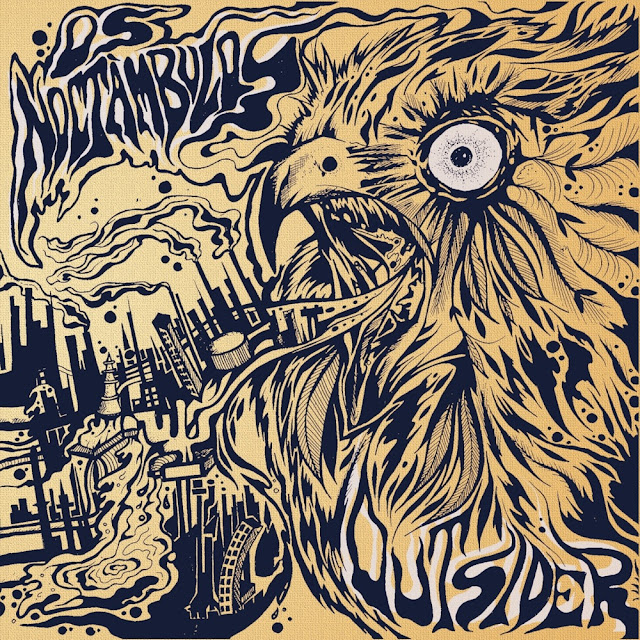 I've been a big fan of Nick Wheeldon ever since I was wowed by the masterful 39th & the Nortons album "On Trial" back in 2012 (available here for free!) - a perfect hybrid of mid sixties Dylan, the Seeds, and Gram Parsons.

Things have certainly changed musically for Nick since then; relocating from the U.K to Paris, Os Noctàmbulos was born and the Seeds won out over his other influences. Os Noctàmbulos' debut full length "Corsica Garden", was a moody, jangly piece of retro garage-folk/punk which successfully drew on the likes of the Seeds and the Dovers, and at the time seemed to represent the band firing on all cylinders. Shows what I know, as this new 7" absolutely blows "Corsica Garden" out of the water in terms of concentrated intensity. Both sides are primitive, snotty garage-punk numbers with huge Farfisa organs, out of control surf guitar shredding, and raw, on-the-verge vocal performances from Wheeldon.

"Outsider" is the more in-your-face of the two, quickly evolving from a hypnotic Farfisa riff into a raucous, hyperactive stormer, with an anthemic chorus and 110% attitude from all involved. "Watching You" starts out at the same frenetic pace, but adopts a spooky, minor-key approach, affecting an air of mystery which makes this the more long term favourite of the two.

A perfect wee 7". Maintaining this level of intensity over anything longer would be exhausting for listener and performers alike, but as it stands here - perfect.

You can order the 7" here, and stream both sides below: