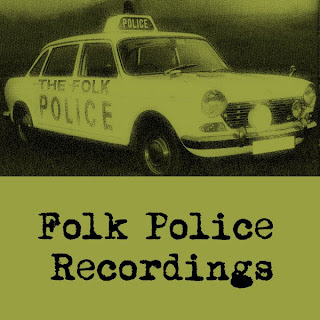 Nigel Spencer from the fabulous Folk Police Recordings label ( responsible for the latest Sproatly Smith, The Woodbine & Ivy band the the Weirdlore compilation among others ) has invited us to join him on his Desert Island. He's not entirely happy with his lot, but has ten great albums with him to help exorcise the ghosts of those he can never hear again.

"Lots of omissions here, some of which I’ll allude to below, but how can anyone come up with a definitive list of ten or so albums without missing out some truly astounding music? I’d come up with the usual caveat about any list like this being subject to change on a daily basis, but it isn’t entirely true: at least half of the albums here would make the grade almost permanently. So… if the desert island were big enough, I’d also take some Beatles (Revolver or Abbey Road), a bit of classic punk (probably Crossing the Red Sea with the Adverts and a Ramones album), lots of traditional folk from the seventies and a smattering of folk rock, jazz and classical – Ralph Vaughan Williams, Mr Fox, Sun Ra, Arvo Part, Trees and Bitches Brew-era Miles Davies spring to mind. Shockingly, there’s almost no prog, yet Gong, Hatfield and the North and Caravan at the very least are an important part of my musical hinterland. There’s no Bevis Frond, no Peter Bellamy, no guitar soli (where are Robbie Basho and Jack Rose, for god’s sake?), no Dock Boggs, no Toumani Diabate, no Stone Breath, no Piper at the Gates of Dawn, no Incredible String Band. This damned island is no fun at all – I’m already picturing myself sitting under a lonely old palm tree with my paltry ten LPs grieving for all those classic albums I’ll never hear again… And finally, my desert island would have an entirely cupboard full of compilations, starting with Nuggets, Insane Times, Meridian 1970, Country Got Soul and Perfect Unpop. Some music was made for anthologising: I’ve never bought the myth that compilations aren’t ‘proper’ albums… "

Here we go, then:

Easter Everywhere – 13th Floor Elevators
I’d include this for ‘Slip Inside This House’ alone – probably one of the most perfect eight minutes of music ever committed to vinyl. The combination of Roky Erickson’s plaintive voice, ready at any moment to spill over into a full-throated rock ‘n’ roll howl, Tommy Hall’s strange and powerful lyrics bursting at the seams with pseudo-religious imagery and the band’s deep-fried psychedelic desert rock is pretty much unbeatable.
BUY IT HERE

I first bought this when I was 13 and have been listening to it regularly ever since. Apart from being the band that led me to discover the 13th Floor Elevators via their cover of Fire Engine, Television showed us you could do incredible guitar solos without descending into aimless noodling or guitar-bore showing off – and do them in the context of great, punchy, soulful rock ‘n’ roll. There’s something very economical about their sound, yet it also has an expansive, yearning quality very few guitar bands have successfully achieved – most bands who have attempted this have tipped over into pomposity and the cult of wide-screen epic tedium. And Robert Mapplethorpe’s evocative cover photo is one of the iconic images of the punk era.
BUY IT HERE

Time of the Last Persecution – Bill Fay
There isn’t a dodgy track on this album. Lots of faintly irrelevant questions have been asked as to whether it is a portrait of one man’s mental and spiritual disintegration. What matters, however, isn’t necessarily Mr Fay’s state of mind when he wrote these songs and recorded this album, but the fact that every one of them is a small masterpiece. In a parallel universe, this would have been one of the best selling singer-songwriter albums of all time, the genre wouldn’t be dominated by insipid bollocks and no-one would have heard of Elton John.
BUY IT HERE

Even Serpents Shine – The Only Ones
I suspect this band were always a bit unfashionable – I can recall punk mates sneering slightly about my mild obsession with them (they weren’t stripped down enough, they did guitar solos, their hair was too long). In retrospect, it’s a psych-influenced classic that has stood the test of time far better than some of the more ‘acceptable’ punk and new wave releases of the era. All this is notwithstanding the sneaking suspicion that every song is essentially about Peter Perrett’s dysfunctional love affair with heroin.
BUY IT HERE

Fully Qualified Survivor – Michael Chapman
It could have equally well been Flat, Baroque and Berserk by Roy Harper or Outlander by Meic Stevens as this. I’m not generally a fan of the singer songwriter genre – too much of it is navel gazing, introspective crap, and my patience for desperately sensitive young men with guitars is extremely limited (NB: how I wish they would stop sending their demos to Folk Police we’re NOT INTERESTED in singer songwriters – not unless you’re as good as Adam Leonard. And chances are you’re not, so just stop it. Phew, that’s better…). Back to Michael Chapman, songs like Postcards of Scarborough and The Aviator take this stunted and bankrupt genre to a completely different level. It helps that he’s also a phenomenal guitarist.
BUY IT HERE

Christian Lucifer – Perry Leopold
Considering the amount of railing I’m doing against singer-songwriters and against epic tendencies in music, this list is riddled with both. I’d suggest it’s the flowers in a dungheap syndrome – all that crap must occasionally fertilise something beautiful. This album has lashings of great song writing and is shot through with a sense of grandeur – at times it sounds like an acid-folk Scott Walker, which is not something to be sniffed at. I’ve absolutely no idea what he’s on about most of the time – there seems to be some sort of Gnostic dualism vibe going on - but nonetheless it’s mesmerising stuff.
BUY IT HERE

Rockbottom – Robert Wyatt
Robert Wyatt could sing the instruction manual for a washing machine and still sound incredible. I think I’m attracted to plaintive voices and songs with a yearning, melancholic quality, and this album has both – along with a dash of humour and some moments of pure, unbridled ecstacy. I’ve had a copy of this album since I was about 17, when I bought it as a cut price double reissue with Ruth is Stranger than Richard, and I can still lose myself in it completely.
BUY IT HERE

I’ve listened to loads of psych folk from the early 70s and I’ll let you into a secret: a lot of it isn’t very good. For every Mellow Candle or Forest or Comus, there are plenty of bands who have one or two decent tracks on an otherwise moribund album and there are stacks of truly awful albums that are obscure largely because they deserve to be. I think I was lulled into a false sense of security by the Lammas Night Laments series of CDRs that The Unbroken Circle website put out: not only was a lot of thought put into sequencing these compilations, but Mark Coyle who ran the site was very adapt at picking out the wheat from amongst the chaff. Amaryllis is one of the good ones – the title track, a progressive folk epic (that word again!) that takes up the whole of side one is worth the price of admission on its own.
BUY IT HERE

Farewell Sorrow – Alasdair Roberts
I could have chosen any one of Alasdair Roberts’ albums. Quite simply, he is the single most important figure to have emerged on the British folk scene in the past 20 years. For much of this time, he has ploughed a lonely furrow, playing traditional songs and folk-inspired originals to a non-folky audience, whilst until recently largely being ignored by the ‘official’ folk scene. In an era where British traditional folk is dominated by well-mannered, clean-cut music school graduates who don evening wear for their album covers and churn out technically proficient yet hugely dull folk-lite for an increasingly elderly and musically conservative audience, we need people like Mr Roberts, who understands that traditional British folk music is a visceral and deeply human thing that needs to be treated accordingly. This album is nearly all made up of Ali’s own songs and they demonstrate just how well he understands and inhabits the rich seams he mines.
BUY IT HERE

I’m slightly obsessed with Indian classical music – I have a whole shelf of albums covering various vocal and instrumental traditions fro different parts of this vast country. This road was one I started travelling down when I visited India 12 years ago and, as well as falling in love with the place, was lucky enough to catch quite a lot of live music. I freely admit to knowing virtually nothing about it – I just like how it sounds. It ticks a lot of boxes for me – drones, improvisation, music that ebbs and flows and builds to an ecstatic crescendo. I could have chosen lots of different albums to take to my desert island, but I’ve gone for one by sarod maestro Ustad Amjad Ali Khan, partly because I love the sound of the sarod and of his playing and partly because of all the Indian classical albums I have, it is his I return to the most.
BUY IT HERE

Cruel Sister -Pentangle
Finally, I wanted to include at least one traditional folk album and one folk rock album, and I really struggled as to which ones to pick. I tend to like best the recordings made between the late sixties and mid seventies, because they have a rawness and immediacy that is sorely lacking from most traditional folk albums that are being released these days. I also wanted to pick an album produced by Bill Leader, who was responsible for so many of my favourite folk albums, from Bert Jansch’s Rosemary Lane to Mr Fox’s The Gypsy to Nic Jones’ Ballads and Songs to Ray Fisher’s The Bonny Birdie to Mike and Lal Waterson’s Bright Phoebus. So the obvious choice is Pentangle’s Cruel Sister – a folk rock album of traditional songs recorded by Bill Leader. And to cap it all, it has Pentangle’s finest moment, the incendiary Jack Orion in all its 11 minutes of splendour. One of the thinks that puts Pentangle head and shoulders above most folk rock is that they have a real airiness and lightness of touch – especially in the rhythm section – that stands in stark contrast to the rather earthbound plodding that hampers much of a genre whose finest moment is still yet to come.
BUY IT HERE