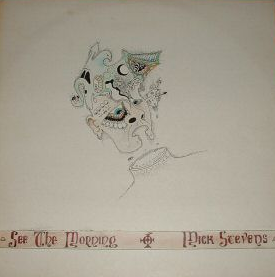 A new discovery for me, this 1972 title was originally released on the Deroy label and destined for a life of obscurity by that label's practice of pressing excruciatingly small runs - almost always less than a hundred, and often no more than ten.
Chances of picking this up on vinyl then are very slim, but fortunately Shadoks have released this on CD coupled with another of his albums, which I haven't heard so won't cover here.
There are a seemingly endless amount of small / private press folk records from the sixties and seventies, so what's so special about this one?
For a start this is one acid-folk rarity that actually has some psych content. Stevens may have recorded this himself, but he's piled on the overdubs - tasteful layers of wah wah guitars, inventive, complex and occasionally avant garde multi layered harmony vocals, and most notably on album closer "Salotan Cinonrever", some very precise and quite beautiful backwards guitar parts.
The songs are memorable too, avoiding another common failing of these private press LPs. Indeed it's quite plausible to imagine "See the Morning" having been released by Deram or Harvest, had the right pair of ears heard it in the first place.
Fans of everyone from Cosby, Stills and Nash and the Fleet Foxes to Nick Drake and Dave Bixby should enjoy this.
Stevens may no longer be with us, but we've been given a second chance to discover his music, so let's not let it sink back into obscurity.

Buy it on CD Here