A Quick Chat with The Paperhead 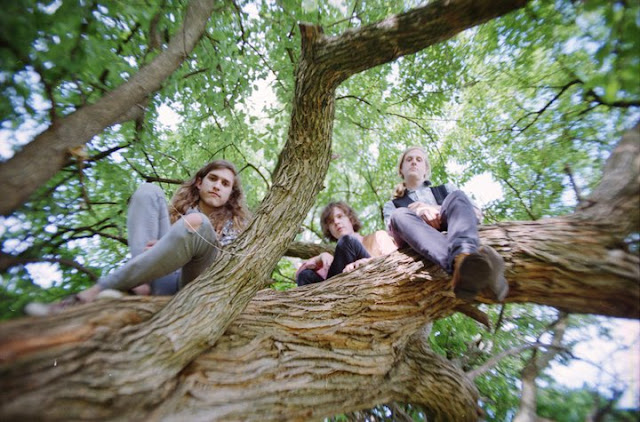 Walker from the Paperhead was kind enough to take some time out from his busy schedule to have a quick chat about their single "Pictures of her Demise" ( reviewed here. )

THE ACTIVE LISTENER : Pictures Of Her Demise and it's b-side are much more focused and concise hits of pop psych than the more experimental material on your albums. Is this an indicator of where your sound is headed or a case of you writing specifically for the 7" format?

THE PAPERHEAD : It's both. We wrote those songs specifically for a single, so we made them short and to the point. A single can't really meander the way an album can. I guess both songs are more performance-oriented. The studio is less of an instrument. We recorded them last August, after about a month of touring, so the concision of playing live probably also influenced the songs. That tour was kind of eye-opening in terms of playing more cohesively and powerfully live. Since then, I guess we've been more interested in a more direct sound in our recordings, so maybe that's the direction we're headed in.

THE ACTIVE LISTENER : How do you go about capturing such an authentic late sixties atmosphere?

THE PAPERHEAD : I guess we've just always listened to 60s records a lot. We use some old gear too.

THE ACTIVE LISTENER : You're obviously hugely fond of the U.K psych scene of the late sixties. Can you tell us a little bit about a few of your favorite albums and singles from the era?

THE PAPERHEAD : That's tough. To name a few, our shared favorites have lately been The Idle Race's "Birthday Party", The Move's first album, Billy Nichols's "Would You Believe?", and The Soft Machine's first album. It's great to listen to "The Soft Machine" along with Kevin Ayers's early stuff to see how he continues the same trains of thought into his career. "The Birthday Party" and "The Move" are big inspirations for playing live. "Tomorrow" has also been a big favorite for a long time. As far as singles go, The Pretty Things' "S F Sorrow"-era singles are on the top of the list. They negate pretty much everything I just said about singles. "Defecting Grey", "Talkin About the Good Times", and "Mr. Evasion" are longish, all over the place, and digressive but still maintain a perfect, snappy pop cohesion. They're brilliant.

THE ACTIVE LISTENER : And finally, what's next for you musically?

THE PAPERHEAD : We leave for a month of tour in July. Then we're planning to make a new record when we get back.