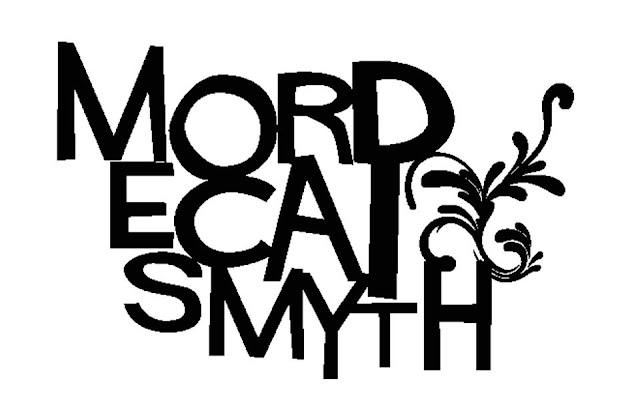 The enigmatic Mordecai Smyth and I had a chat about his music, Syd Barrett and time travel among other things.

Settle into your favorite armchair and have a read then:

THE ACTIVE LISTENER : Introduce us to Mordecai Smyth, the person and the band.

MORDECAI SMYTH : Mordecai Smyth the person, is yours truly, simple as that! Mordecai Smyth the band consists of myself and some old and trusted friends.
They are very talented and I am very lucky to have them. The "amazing" Mr. Heath (or "secret weapon" as I call him) is my main collaborator. He plays bass, and guitar and sings some of the harmony parts. He is the great "elaborator" in the band. I write the words and the "bones" of the songs and he adds all these wonderful overdubs. Hence the "amazing" - I am always amazed at how good he makes my songs sound. He also produces the overall sound.
Thaddeus Jones is the drummer. I never have to advise what sort of groove / fills I want for a song:
he seems to know instinctively, which is fantastic.
Tabitha plays clarinet and sax. She came up with the wonderful riff for "Almost Muder Ballad": she was just messing around, playing and came up with that. I picked up on the idea and we made it into the song.
I play keyboards (I tend to stick to keyboard sounds used widely in the '60's, purely because I love them: mellotron, piano, organ) guitar, percussion and sing. I also borrowed a sitar for "I've been So Tired" which was amazing trying to get to grips with! Loving Psychedelic music as I do, this was quite a moment for me: I felt like I was recording a track for one of those "Psychedelic Headswirlers" compilations!

THE ACTIVE LISTENER : What was the record that made you think "I can do that", and got you started as a songwriter?

MORDECAI SMYTH : This is a tough question...! If I am allowed, I shall give more than one example as an answer. Firstly, I remember buying a vinyl copy of Syd Barrett's "The Madcap Laughs" when I was 15. I didn't know he had been in Pink Floyd or anything. I just loved the album cover and bought the record on the strength of that! I remember very clearly thinking "wow!" It didn't sound like "modern" productions. It sounded very close and intimate to me, as if the band was there in the room with me. It didn't matter that he sings out of tune in places either - it sounded so magical. It gave me hope and I remember thinking I'd love to make music that sounded intimate and told little stories, like the song; "Here I Go".
Alongside Syd, I remember hearing Jimi Hendrix and wanting to play guitar like that! After playing my first guitar, I realised very quickly, that was never going to happen: more like "I definitely can't do that!
The other factor was Punk Rock! In Punk, there is this attitude that anyone can have a go and that everyone has something to offer: I like that. I think Punk was the thing that gave me the confidence to "have a go".

THE ACTIVE LISTENER : Given the option, would you rather be plying your musical trade in the mid sixties or now?

MORDECAI SMYTH : Interesting question. As there are pro's and con's to both, I am torn. This is difficult to answer without sounding like a history lesson, so I hope my answer isn't too boring.....

Hmmm. I'd loved to have been around in the '60's in a successful band! Watching documentaries about this period, you get the sense that the people involved felt that something special was happening, appreciated it and had a lot of fun. It seemed to be a much more innocent age in many respects. The bad thing was, many artists were exploited /ripped off. Some artists were merely "puppets" during this time for songwriting teams employed by record companies purely to make money. I'd have hated to have been in that position. This still happens today but you don't have to go down this route in order to be heard......?

During the Sixties, people started to think of Pop music as an artform and started to experiment with sound more: I use The Beatles "Revolver" as an example. Also, the technology was advancing, giving musicians and producers the tools to do just that. There is a funny film clip of Ringo, in the studio, messing around in the control room saying, "well, you put the guitar through here and it comes out there, sounding like a piano". Here, I think things became very interesting and artists were "allowed" to push the boundaries in "Pop" music. If I was in that position, then yes, to ply my trade during that period would have been great!

However, with the technology available today, the sky's the limit. One thing I love about making music today, is that I have the equipment I need to record the music I want to make. I don't have to go cap in hand to a record company and pray they will give me a record deal, so I can go into a studio to record my music.
I think in the mid Sixties, many bands weren't even allowed in the control room of the studio! Maybe only to hear the playback of the finished mix! I am not restricted to booking into a studio and being pushed for time: I can record music as and when I want to. Going back to the Punk ethos - I like being able to "do it myself" and
make music for myself. I am not at anyone's beck and call and have no pressure or stress or no-one telling me I should sound like so and so.

Music for me is a creative and fun outlet; one that keeps me sane, not makes me mad!

I also like the fact that we have the internet and I can contact like minded people all around the world and ply my trade that way. All in all, we are creatures of our time, so I'm happy being around now: it is all I will ever know, (unless Dr. Who takes me back to the 1960's in the T.A.R.D.I.S.) Now that I would like! It
is interesting to speculate what sort of music I would have made had I been around in the Sixties - would it be similar to what I do now? I wonder if people back then would have liked what I do now.....?? Oh dear, I think your question has broken my mind! Let's move on quick! 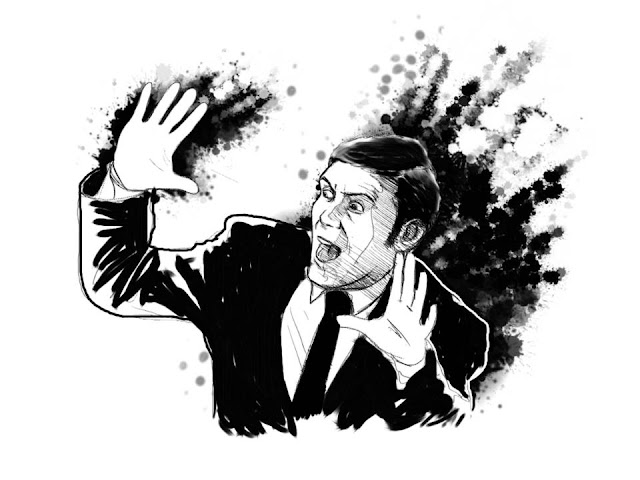 THE ACTIVE LISTENER : I've read in a previous interview, that you mentioned touring and live performance not being likely.
If there were no practical constraints ( e.g money / reality / time etc.) where would you be performing and who would you be sharing the bill with?

MORDECAI SMYTH : Probably in some toilet in London, with some other artists at the same level as me!

Ideally, I'd like to be playing some of the nicer venues in London. Who with? Hmmm, support to Ray Davies?! A slot on the bill with Paul Weller? That would be nice!

Actually, I have just been approached by some friends who have a band and they have very kindly asked me if I would like them to perform my songs live. Naturally, I have agreed - I am looking forward to hearing them perform my songs! I have heard them play covers of "I Fought the Law" (Bobby Fuller 4) and The Witch (Sonics) as well as songs by The Move and they do them really well.

THE ACTIVE LISTENER : Who in the current music scene do you feel a kinship with, and why?

I feel a kinship with Icarus Peel. He is a remarkable man who has made two albums under his own steam. He has his own studio and writes and records his own very original and wonderful music. We sound quite different, but we have a lot in common.

I also feel a kinship with "The Shadow Kabinet". This is a chap, Steve Somerset, who writes and records his own music, which again I love. I keep in regular contact with both these artists and I think we all share a love and respect of each other's music, without it being the "mutual appreciation society". I trust their judgement and know that I can depend on them for honest, no-nonsense criticism. It is good to have such friends. I hope your readers will check both of these artists out. My favourite album by Icarus Peel is "Tea at my Gaffe" and by The Shadow Kabinet, "Sliding World's Apart". I know that the Shadow Kabinet have recorded a new album , which should be out soon. Icarus, is working on a very Sixties sounding project called "The Honey Pot". I have heard bits of both and I am very excited about them.

THE ACTIVE LISTENER : Do you have any idea why you feel such an affinity for the music and pop culture of an era that you (presumably) weren't around to experience firsthand?

MORDECAI SMYTH : I love songs that tell stories. Many songs from the 1960's do exactly that: Arnold Layne by Pink Floyd, Jenny Artichoke by Kaleidoscope, The Magic Shoemaker by The Fire, many Beatles and Kinks songs, songs by The Move, The Who etc..... I love the tongue-in-cheek aspect of some of those songs too.

I like the way 1960's music had the ability to poke fun at society.
A lot of modern "Pop" music seems to be too serious or on the other hand, total dross!

I love a lot of the sounds used in the Sixties. I have already mentioned the keyboards, but guitar and bass sounds too.
I love the 3 minute single format. I think it is a great discipline to write in. It makes you focus on what you want to say. It distills and condenses your ideas and gives a purity through that.

THE ACTIVE LISTENER : Write your own (brief) review of Sticky Tape & Rust.

MORDECAI SMYTH : As Jeremy, the "Nowhere Man" said in "Yellow Submarine" - "I never read my own reviews" - unlike him, I couldn't possibly write one! That's your job!!!

THE ACTIVE LISTENER : How did Mark Wirtz come to hear the record?

MORDECAI SMYTH : The chap at the helm of Mega Dodo Records, John Blaney is also a writer. He interviewed Mark Wirtz for an article on Kippington Lodge. He told Mark he was setting up a record company and told him about my album. He sent him a copy and Mark Wirtz was very impressed. This made me very happy, as he was an in-house producer at Abbey Road in the 1960's - someone who's work I admire. Also, two other people who were plying their trade in the Sixties; Peter Daltrey from Kaleidoscope (the UK one) and Dave Lambert from The Fire have heard the album and have been very complimentary.

THE ACTIVE LISTENER : Nice! What can you tell us about the 4 track E.P that you're working on at the moment?

MORDECAI SMYTH : Well, we seem to have a thing for guitar riffs and backwards guitars at the moment, with a dash of mellotron! We have two songs finished, a third almost finished and a backing track down for the fourth. I always liked The Beatles 4 track EP's and thought it would be nice to follow in that tradition. We have tried to come up with 4 songs, each worthy of being the lead track on a single for this one, which is a tall order. However, we are very pleased with how it is sounding so far.
Let us hope the critics agree, when they hear it!

THE ACTIVE LISTENER : Well, this is one critic who can't wait!

You can buy it on vinyl here. And on CD here. 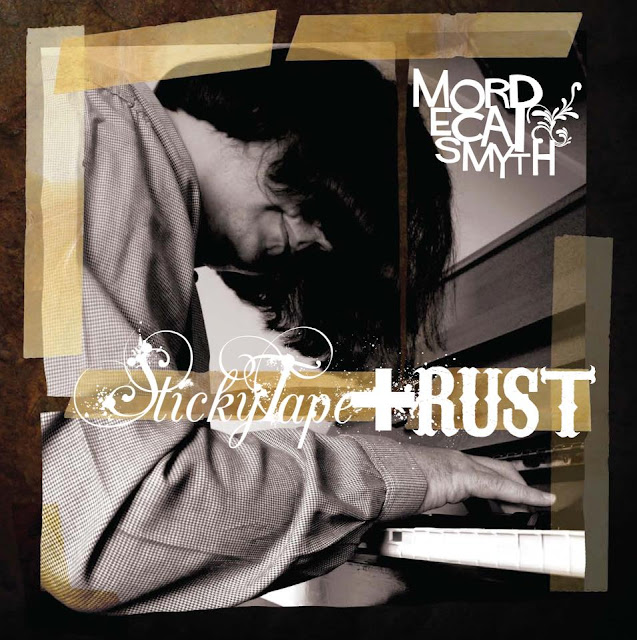