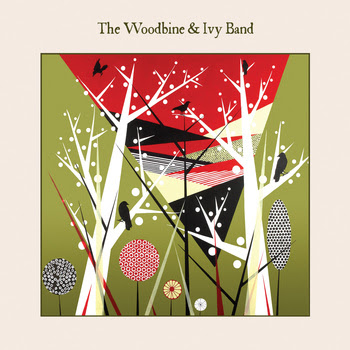 Having enjoyed the "Weirdlore" compilation and Sproatly Smith's latest so much, I've been working my way back through the impressive items in the Folk Police back catalogue.
The Woodbine & Ivy Band's debut is an album that in many ways harks back to the early days of the Harvest and Island / Witchseason releases of the late sixties and early seventies.
They're a folk rock big band in the tradition of the Albion Band.
With a different guest vocalist on each track, and a number of unexpected instruments not normally associated with the genre - notably the aching steel guitar of Alan Cook, this is an album of exceptionally well chosen and arranged tunes - mostly familiar, which have rarely sounded better or been approached in as adventurous a manner.
"Alison Gross" is reborn as a jittery rocker.
"Gently Johnny" is given an "Out on the Weekend" treatment with an attractive loping delivery, evocative steel guitar, and towards the end a suitably unsettling group chorus.
'Poor Murdered Woman" is even more powerful and poignant than Shirley Collins version, which I'd previously assumed to be insurpassable.
"Derry Gaol" is the indisputable highlight for me however, with intricate harp work, haunting drones, and sombre trumpet work that evokes the atmosphere of John Martyn's "Bless The Weather" by way of Miles Davis "In a Silent Way" and Van Morrison's "Haunts of Ancient Peace".
Another winner for Folk Police which while not traversing the same wyrd folk path of Sproatly Smith or the Weirdlore collection, is no less innovative or adventurous in it's own way.

Buy it on CD here.