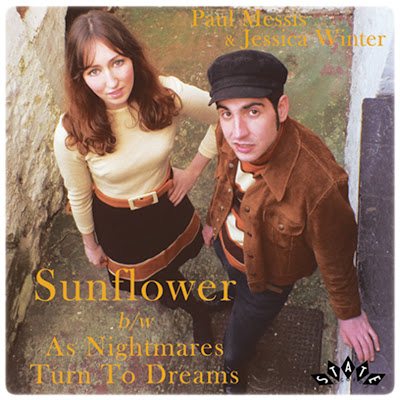 Fans of previous Paul Messis material will be in for a bit of a surprise from his latest offering.
Messis' earlier material bypassed the expected U.K influences in favor of a tough sixties garage rock sound that had more in common with U.S outfits like the Sonics than the Kinks.
Teaming up with Jessica Winter from the Hall of Mirrors, these two sides are a considerably different prospect to his normal fare, and a chance for Messis to show his appreciation for a much more folk-rock inspired sound, think San Francisco circa 1967 and you're definitely on the right track.
A-Side "Sunflower" is as sunny as you'd expect from the title, a chiming folk rocker with shimmering sitar accompaniment and vocal harmonies that recall those of Grace Slick and Marty Balin.
The B-Side " As Nightmares Turn To Dreams" explores the darker side of Summer of Love, and is a much moodier piece built upon a base of twelve string Rickenbacker with ghostly dual vocals with Jessica coming into her own here.

Two very different, but equally appealing sides to this coin.

Enough from me though, this is what Paul has to say about it:

"'The new 45 rpm single, is a west-coast psychedelic style contradiction, featuring the 'up' Sunflower and on the flip side is the rather downtrodden 'As Nightmares Turn To Dreams'.
I wrote these songs in around November last year and recorded them in December/January. Jessica Winter from London Pop-Psych group, The Hall Of Mirrors joined me on vocals, to give the song a true, San Francisco vibe and sound.
Influences include The Jefferson Airplane/ Great Society, The Fairport Convention, Gentle Soul, The Growing Concern and Blackburn and Snow.... things like that, which no-one else really has attempted within the psych genre.
It's more rooted in an American form of psych rather than a British style, which gets on my nerves at times, even though folks have told me that Sunflower has a very British Acid-Folk vibe.
The 45 is a product I suppose to express my internal being, the UP and Down, the light and dark.... as weird as it sounds, it's a by-product of my depression, there are a lot of elements to the 45, it's pretty rooted in the esoteric, which is cool because anyone listening to the songs have no idea what the hell point of view I was coming from."

Check out the promo clip here :