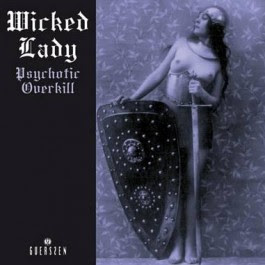 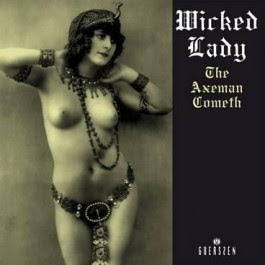 Guerssen Records are a label that I have a lot of affection for after releasing two of my favorite late sixties LPs July and the Rainbow Ffolly on vinyl.
Rejoice then lovers of proto doom metal, for they've now turned their attention to the Wicked Lady back catalogue.
For those who are unfamiliar with them Wicked Lady were active between 1968 and 1972 and specialized in a fairly primitive, but highly appealing mixture of hard rock with early doom influences and amazing heavy psych guitar from Martin Weaver.
Weaver is more well known as the guitarist and vocalist behind Dark who's privately pressed LP "Around the Edges" changes hands for cripplingly large prices.
While his relaxed vocal delivery may not be for everyone, his fantastic guitar excursions certainly are.
Those looking for subtlety should definitely look elsewhere, but anyone with a taste for big bludgeoning riffs ala Budgie and the Sabbs, with peals of heavily wah-wahed lead breaks should definitely check these out.
They were previously released on CD by the Kissing Spell label in the nineties and while I never heard those versions, the general consensus seemed to be that the sound quality was rudimentary at best.
It would appear that either psych fiends are an extremely picky bunch or that Guerssen have done some work on this - as these are two of the nicest sounding private press / demo recordings I've heard from the era.
You can hear "Ship of Fools" ( from the earlier Kissing Spell release) below